Tom hangs up his boots

The popular 29-year-old hasn’t played since Cov’s pre-season game against Jersey Reds and, following surgery on a herniated disc, has taken the decision to retire after a brave attempt to get back to full fitness. 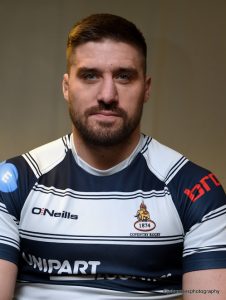 “It’s probably the most sensible decision I’ve made in my career,” said Poole, who came to Cov from junior club rugby leading into the 2012-13 season and, a hard-working grafter, never gave less than 100 per cent for the Blue & Whites.

“Injuries don’t discriminate and although I possibly could have got back, I wouldn’t have been able to play my own brand of rugby – not always the prettiest, but effective. That would have been the most frustrating thing for me, and what would the quality of my life have been like afterwards?

“I had discussions with the relevant people and that was the decision that was arrived at.”

Poole came off at half-time in the Jersey game, knowing that something was far from right.

“There’s no way of finding out an exact date for when it started, but looking back I think there were times when I had little things and twinges that weren’t right and I just put it down to general wear and tear.

“it just gradually got worse going through pre-season, and the further we progressed in and the more physical it got, I was having all sorts of difficulty with it, just in basic things like gripping. At one point I had to ask Andy Brown to physically put my hand on his shorts at a scrum because I couldn’t feel them.

“With the physios we tried for a long time to get it right, but we didn’t really know what the problem was until I had the scan and I was diagnosed with a herniated disc that was pressing the nerves in my spine.

“I realised then that I wouldn’t come back without intervention and it was something that obviously needed to be operated on.

“The surgeon, Mel Grainger at the Royal Orthopaedic Hospital in Birmingham, has done an amazing job, but because it’s nerve damage it’s something that doesn’t necessarily go away – I might have symptoms for ever more, or I might not.

“Hannah Walker has been absolutely excellent, without her I’d have been a bit lost about what to do, and along with the rest of the physios and the S&C team really worked hard with me to try to get it right.

“We hadn’t really looked at it in terms of me not playing again, we put everything into it and I worked hard, but in the end it’s just one of those things and I was obviously never going to come back from it.

“It’s not just something that affects my rugby, it can affect me on a daily basis.

“I’ve had a fair bit of time to come to terms with it, it was always there in the back of my mind, but it wasn’t something I was willing to submit to until probably even a couple of weeks ago.”

A committed club man, Poole bows out with no regrets and insists he will remain an ardent Coventry supporter while focusing on his career as a senior estimator for a construction-based contractor.

“I’m going to miss the game, but going into coaching isn’t something I’ve thought about and for now I’ll just stick to being a Cov supporter and concentrate on my career.

“There’s a lot of room for progression and development in my job, and over the years I’ve had to balance that out with being a semi-pro rugby player which doesn’t always work.

“I’ve had an amazing time at Cov, it’s been an absolute blast.

“I’ve got so many memories, good and bad, from my time at the club and I wouldn’t change any of that for the world.

“It would have been nice to have had a few more games, but nothing’s ever guaranteed and while I’ve been the guardian of the shirt I’ve thoroughly enjoyed everything that I’ve done.

“I’ve got no regrets and I can happily walk away knowing I’ve given everything for the club every time I’ve played.

“I always played rugby to enjoy it, and by chance I ended up here through association – Brett Daynes instigated me coming to Cov and I never even expected to get a contract. I thought I’d have a crack at it, and I just enjoyed it, got my head down and grafted and worked really hard.

“I’m proud of what I’ve achieved at the club, and I’m going out as part of a promotion-winning squad and having played my last game in front of a group of supporters who are the best in National One if not the Championship.

“It’s hard to find the words to do justice to the supporters. If I could thank each and every one of them individually I would – they’ve just been outstanding throughout my whole time here. I can’t thank them enough.

“Cov is such a great club and the way they’ve looked after me through this has just been outstanding – it’s not been a case of them being obliged to do it, they’ve done it because of the people they are and the club this is.

“I’ll be up at Butts Park when I can and looking forward to seeing how they fare in the Championship. They are where they deserve to be and it’s exciting times.”

Said director of rugby, Rowland Winter: “Tom has been an outstanding servant to the club.

“He has grafted for every one of his 117 appearances and is one of the hardest-working players I have seen, and a massive part of the team on and off the pitch.

“We are gutted that he hasn’t been able to play this year, but he has contributed behind the scenes and shown his dedication and commitment to the club.”