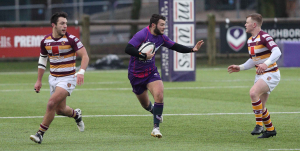 Tim Bitirim, 21, joins from Loughborough Students on a two-year contract to add further quality and competition to the back line.

The former Saracens and Wasps Academy utility back, who has also represented England Counties U20s, will continue his studies at Loughborough University.

Director of Rugby, Rowland Winter explained why he chose to add Bitirim to the squad and admits his excitement to see the former Irish Wolfhounds 7s player in action for Coventry Rugby.

He said: “Tim is a creative player, with the speed and skills to play anywhere across the back line. He stood out when we played Loughborough and caused us real problems from fullback on that day.

“I am excited to see how far he can develop his game at Coventry under the guidance of Nick Walshe and the other coaches.

“Our Development Squad will now train alongside the senior squad, which will help the progression of all the young talented players.

“All of them are at National One or Two level already, and now they will work hard to show they are capable of playing in the Championship and the new Cup competition.”

Joining Bitirim, will be four of the brightest talents in the club’s development pathway Kailus Hutchinson, Willie Priestley, and brothers Isaac and Sam McNulty.

Hutchinson, 20, has recently toured with England Counties U20s, and impressed in the back row for Coventry in the title winning campaign.

Hooker Priestley, 21, stepped up to the first team with a run of strong performances at the end of the season, coming off the bench in the title winning game against Caldy in March.

Hard working, industrious back row Sam McNulty, 22, was a standout player in the Warwickshire county side who reached a Twickenham final last week.

Isaac McNulty, 20, has shown excellent promise throughout the Development squad’s season since joining last Autumn, after a few months playing in New Zealand.

Director of Rugby, Rowland Winter extended his thoughts on the promising quartet signing up to the Development Academy squad.

He said: “All four players are young, talented and work very hard to improve their game. They have shown the right characteristics that we look for in the team.

“Kailus and Willie are already capped at first team level, and the McNulty brothers are not far off, so I expect them all to cope well with the step up in intensity that next season will bring.”