PROP forward Jake Byrne will make his first start for Coventry in tomorrow’s National League One game at Old Albanian.

The Leamington-born 20-year-old, who moves up from the development squad to the senior squad next season, has earned his chance after five appearances off the bench and lines up at loose head with Jimmy Litchfield switching across to tight head.

Phil Boulton goes on to the bench, so centre Tom Wheatcroft will captain the starting XV in a 20-man squad showing just one change in personnel from last week’s excellent win over Rosslyn Park – Darrel Dyer returning from illness at No.8 in place of dual registered Freddie Tuilagi, who is playing for parent club Leicester Tigers in their A League game against Worcester on Sunday.

Rob Knox moves out to the wing to accommodate Wheatcroft, who benched last week, in place of James Stokes, while Scott Tolmie starts at hooker in rotation with Matt Price.

Winger Tom Howe is again unavailable, playing for Wasps in their A League game against Newcastle Falcons on Monday.

Byrne’s full debut comes in the same week that Cov announced the launch of a Development Academy aimed at progressing local 18 to 24-year-old players.

“Jake fully deserves it,” said director of rugby, Rowland Winter. “His performance off the bench last week against Rosslyn Park in a tough game was outstanding, and he has been improving all the time.

“It shows that the opportunities are there for young local players to develop with us and come through to wear the Coventry shirt in the first team.”

Cov edged a 43-42 victory when the two sides met at Butts Park in December, scoring ten points in stoppage time to win with the final kick of the game.

“We all feel that the game here wasn’t one where we showed ourselves in the best light, and we certainly want to improve on that and continue our momentum,” said Winter.

“We’ve won our last two away games, and we’re hoping to pick up another win here to show that we really are improving our form away from Butts Park.

“We’re trying to be consistent in what we do, it’s been a really good week at training, and we’re hoping it carries through to tomorrow.”

THE battle to avoid the final relegation place is hotting up with all three remaining contenders away from home in Week 28.

On the face of it, Blaydon – in 15th place – have the easier game away to Cambridge, who succumbed to a late Hull Ionians surge last week. However, at home Cambridge have the ability to score plenty of tries and if they can get enough possession and improve their defence, they should be able to win. This should be a close and nervous encounter with the away side hoping for at least a point.

Hull Ionians, on the other hand, face the more daunting task of travelling to sixth-placed Rosslyn Park whose recent results, especially at home, have seen them surge up the league. Ionians, fighting for their NL1 status, are still capable of causing problems to most teams in this division, even in defeat. In reality, the best Ionians can expect is a losing bonus point or two, with the hope that Blaydon likewise lose.

Fylde, residing in 13th place, still need a win to be safe and will need to be at their best to obtain this at Darlington Mowden Park. Evidently DMP had a poor first half against Esher last week but showed what they could do in the second period, and as long as they don’t give their visitors a start should look forward to a home win.

Birmingham Moseley, after a few stuttering performances, had a good win over Blackheath, but are now back at home to face unbeaten Hartpury RFC. Moseley will be looking for revenge after their heavy away loss at Hartpury, whilst although not at their best, the visitors are still looking to keep their unbeaten record going.  The leaders have the ability to raise their game with some brilliant individual performances and although it could be close, they are expected to win.

Second plays third as Plymouth Albion entertain Ampthill & District. Last week Ampthill sent Blaydon into the relegation zone, whilst Albion struggled to beat bottom side Macclesfield. At home, Albion have a record similar to that of Coventry, and although the two respective packs will face each other in a titanic battle, home advantage should just swing it.

It may be tenth against 11th, but Loughborough Students at home to Esher promises to be an open and exciting affair. After a rather stolid start, Esher have recently found some try-scoring ability which could more than match that of the Students. With both sides capable of both scoring and shipping tries, a high scoring encounter is expected, which might just go to home advantage.

Relegated Macclesfield entertain seventh-placed Blackheath. At home Macclesfield have recently been competitive, but with Blackheath now in sight of Rosslyn Park in sixth the visitors will be looking to sneak this one. 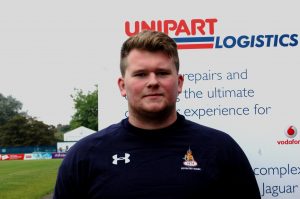