INJURIES to winger Rob Knox and hooker Scott Tolmie have forced Coventry to make two changes for tomorrow’s final game of the National League One season at Loughborough Students.

James Stokes replaces Knox, who picked up a slight ankle injury at training last night, with Corey Hircock coming on to the bench, while Matt Price starts in place of Tolmie who was injured in last week’s win over Darlington Mowden Park. 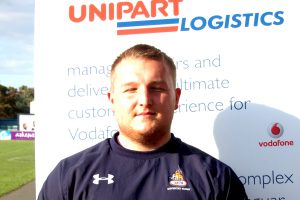 , whose father, Justin, played in the same position for Cov in the 1994-95 season, in the replacements.

Further selection changes to the squad of 20 see Sam Harry return at open side flanker with Darrel Dyer back at No.8 in place of Freddie Tuilagi and Olly Povoas moving to blind side. Jake Byrne starts at loose head prop with Jimmy Litchfield going to the bench on rotation.

Cov have won all nine previous league meetings between the two sides and claimed a convincing 54-14 victory at Butts Park Arena on the opening day of the season, but director of rugby Rowland Winter warns there can be no complacency.

“Everybody puts a tag on Loughborough as a free-running side and it could be an open game, but they have got talented players capable of playing well in a number of ways,” said Winter.

“They will be motivated to win their final game, and it is also the final game for their director of rugby, Dave Morris, so we know they will be pumped up for it.

“Pretty well all their last ten games have been decided by ten points or less, so it’s a really tough challenge for us.

“But it’s a good opportunity for us to end the season on a high, to finish with eight wins would be superb, so the motivation is high for us, we’re confident and well prepared.”

All games kick off at 3pm.

THE final round of games of the season sees champions Hartpury RFC looking to complete an unbeaten campaign, whilst the battle to avoid the final relegation place is a straight fight between Hull Ionians and Blaydon.

Hull Ionians face the daunting task of travelling to their north-east rivals Darlington Mowden Park, requiring a win to confirm their survival in NL1. Ionians come to the game after a fine home victory which keeps them two points ahead of Blaydon, whilst DMP are on the back of a heavy away loss at Coventry. Home advantage might just give Park the edge, but Hull Ionians have shown this season that they never give up.

Hoping for a Hull Ionians loss will be Blaydon, who will still require a win to keep their status in NL1 when as they travel to Old Albanian. OA have recently been suffering some heavy losses and the better form of their visitors Blaydon should make them slight favourites, even away from home.

Champions Hartpury RFC travel to Blackheath hoping to finish off the season unbeaten with a 30th consecutive win. The home side have recently fallen off the pace as they await the arrival of James Shanahan as director of rugby next season and they should not trouble Hartpury too much. From being in the top four earlier in the season Blackheath have slumped to seventh and seemingly can’t wait for the season to finish.

Already confirmed in second place, Plymouth Albion travel to Cambridge who, although playing an adventurous game, have slipped to 13th place as they have been unable to turn possession into points. Although now safe from relegation, Cambridge should find Albion too strong in all aspects of the game as they put down a marker for next season.

Ampthill & District are now confirmed in third place and travel to Rosslyn Park, who have been somewhat lacklustre recently and are now back in sixth place. This could be a battle of two formidable packs and despite the recent better form of Ampthill, they could find Park a different proposition at home.

Hoping for a Coventry loss will be 5fifth-placed Birmingham Moseley who have Fylde as their visitors. Fylde are now safe from relegation and will want to sign off their season with a win for their soon-to-be-departed player coach Paul Arnold, but if Moseley win and Coventry lose then local bragging rights will go back to Moseley. Fylde don’t always play well away from home, but this contest could be close with Moseley slight favourites.

Bottom side Macclesfield face form side Esher at home. Esher have recently suggested that they could be a force next season and will be looking to sign off in style, and they should be too powerful for a brave but outclassed home side.