COVENTRY have selected a starting XV showing eight changes from last week in anticipation of a physical National League One challenge at third-place Plymouth Albion tomorrow.

Albion have only lost once at home this season – like Cov, narrowly to champions elect Hartpury College – and with the Brickfields pitch likely to be heavy, will offer a stern test up front as they attempt to extend a run of four wins and also avenge a last–gasp 34-33 defeat at Butts Park in October.

“It’s a huge test for us,” said Cov’s director of rugby, Rowland Winter. “They will be proud of their home record and desperate to maintain it, but it’s a good opportunity for us to go up against one of the top sides and have a good crack at it.

“They are a good, physical side, and we know we need to match them there before anything else which accounts in some way for the selection we have made.

“We’ve very much drawn a line under the defeat at Fylde last week and are putting all our attention into a strong performance tomorrow.” 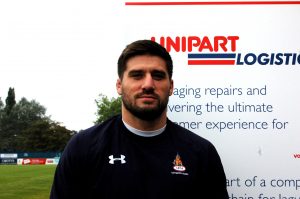 ictured) comes off the bench to start in place of Tom Jubb and Freddie Tuilagi, who has been recovering from a dislocated shoulder, returns at No.8 after a six-game absence with Darrel Dyer taking a turn on the bench where he covers the second and back rows.

There is a return for Olly Povoas, out since being injured at Rosslyn Park at the end of November, at open side flanker in place of Sam Harry.

In the front row Jimmy Litchfield starts at tight head prop on rotation with Phil Boulton, and after a week off Matt Price returns on the bench for Jake Byrne.

In the backs, Cliffie Hodgson returns after missing two games with a gashed knee and plays at full-back this week in place of James Stokes, who has a slight neck injury, while Wasps loanee Tom Howe is available again after Anglo-Welsh Cup duties and starts on the wing for Rob Knox.

Centre Heath Stevens and scrum-half Pete White both move up from the bench where they are replaced by Knox and Will Maisey.

Stokes and Eoghan Grace are currently the only senior squad players who are injured.

Tom Little looks at the rest of the weekend’s National League One programme.

AN easy choice for match of the day on week 22 with second-placed Ampthill & District at home to runaway leaders, Hartpury College. The home side have been the most consistent of all the challengers and with their impressive pack always have a chance at home of causing an upset. If Ampthill can deny Hartpury too much possession then they do stand a good chance to finally take away the leaders’ unbeaten record. It could be a very tight game.

Birmingham Moseley, in fourth place but with a game in hand, have a tricky away fixture at Old Albanian. The home side have the ability to cause an upset and score plenty of tries in the process, especially if they can match Moseley up front.  Overall, though, Moseley have the better side and should just get a close fought win to keep the pressure on Ampthill and third-placed Plymouth Albion.

Fifth-placed Blackheath also face a potentially difficult away day at Cambridge. Having lost their last three games Blackheath will be looking to get back on track, but they face a Cambridge team capable of scoring plenty of tries, even if their defence is a bit suspect. A close game in prospect, but it should just go to the visitors.

The banker of the week should be sixth-placed Rosslyn Park are at home to bottom side Macclesfield. The visitors have shown glimpses of what they can do, but their lack of consistency and inability to hang on to a lead has cost them dear. At home Park are formidable, and with their pack should be able to ease to a comfortable victory which will allow them to challenge for fifth place. Another loss for Macclesfield will surely leave them too much to do to escape the drop.

Darlington Mowden Park will still be smarting after failing to beat Plymouth Albion last week but are at home again against Loughborough Students who whilst scoring heavily have also shown some glaring defensive lapses. A high-scoring game is in prospect with it going to the home side.

Blaydon have a key home game against Esher. What sort of mood Blaydon will be in after shipping 12 tries and 80 points against Hartpury College last week remains to be seen, especially as their visitors eased their relegation fears with a home victory. Esher have yet to win away from home this season and it could be no different at Blaydon who, should they lose, will be favourites for the drop. A nervous and close game is in prospect with Blaydon possibly causing an upset.

If Blaydon lose, then Hull Ionians will be looking to take advantage at home to Fylde. The visitors came from behind to beat Coventry, but are another side unable to win away. Fylde, despite last week’s win are still not safe and will look to win this game which would heap more problems on Ionians. Another close game to call, but if the home side can get their pack to limit possession to the dangerous Fylde backs, then they might sneak an important win.