Stevens and Fenner react to huge win over Birmingham Moseley 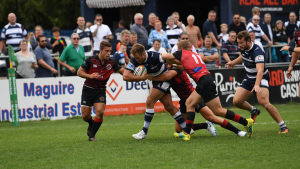 The Blue and Whites scored ten tries to secure another famous victory over their midland rivals and captain Heath Stevens admits the scoreline flattered the side despite a good performance.

He said: “I don’t think the scoreline really reflected the game, we had a few break away tries and the game was a bit scrappy, but fair play to Moseley they stuck at it to the end and made us work for it.

“We do so much detail and role knowledge throughout the week. These games are about how much you want to give work wise. It early days in the season with the calendar. We have Leinster next week and this was a great game to build up to that.”

Alongside the win the Blue and Whites won the first-ever edition of the newly commissioned trophy, the Harry Walker Memorial Cup which captain Stevens was delighted with.

“It’s nice, obviously it was great to win some silverware, it’s great to get this in the trophy cabinet for the boys and it was a nice way to celebrate Harry Walkers life.

“Definitely, a lot of the boys put their hands up for selection there, this game was always about what we can give work wise, how much role knowledge you have got.

“It’s going to be a massive test next weekend against a Leinster team but it’s all building and focusing towards that first game against Jersey.”

Coventry’s fly-half Tony Fenner featured at both 10 and inside centre during the match due to an injury to new signing Jake Sharp and the 28-year-old admitted it was good to be back playing at Butts Park Arena.

He said: “It was good, really good. positive stuff to take out of it, there’s still stuff to work on but as a first hit out we are really pleased, and we will take that.

“No not really I have played a lot at centre last year and I slotted back into there today, but it was good to get a bit of time at ten, I wasn’t expecting it but unfortunately Sharps back is playing up.

Coventry dominated majority of the match with a strong set piece helping the side to secure quick ball and despite a few things to work on, Fenner believes there were many positives to take from the match.

He added: “There were a number of things, there were a lot of turn overs and we capitalised on that, our scrums and lineouts were fantastic today when the boys went down the other guys were stepping up, so it was really positive.

“I think Leinster is going to be a huge step up, so we will take that and build into that ready for next week.”