Something’s got to give!

COVENTRY versus Blackheath – without question, the oldest fixture remaining on our regular list and on Saturday a game which pits together two of the remaining unbeaten sides in National League One.

The origins of Blackheath Rugby can be traced back to 1858. They were founder members of the Rugby Football Union, while also sharing the honour of having played the first club fixture in the world, against southern rivals Richmond.

The build up to this meeting shows it to be second in the table v third, admittedly at this still early stage of the season when positions in  the table can change so easily.

Blackheath though, as with Cov, have enjoyed a pretty flawless start with three wins from three but have secured one less bonus point.

There were many changes at Well Hall during the close season with former director of rugby, Colin Ridgeway leaving. The new coach is a name well known to us already in James Shanahan, ex-Old Albanian and Plymouth Albion, who has Andy Holloway and player-coach lock forward Tom Stradwick working under him.

Having completed last season in seventh place, there was a fair degree of player movement during the summer. Some 20 players were brought in and around 26 retained, with only a limited number of departures. Amongst the latter was lock Greg Gillanders, who Cov supporters may remember had a season with us in 2007/08 on loan from Leicester.

In terms of the newcomers, seven of them appeared in the starting line-up last week against Ampthill, five in the forwards. Three of these moved from Old Albanian –  prop Hayden King, hooker Matt Miles and flanker Harry Bate. The others were prop Danny Herriott, ex-Rotherham Titans and another who spent time on loan at Cov when with Northampton, and lock Neale Patrick from London Scottish.

Keeping strictly to league meetings, Cov and ‘Club’, as Blackheath are known, have met a total of 28 times with 19 wins to Cov and seven to Blackheath, and two matches drawn.

Last season it was very much a case of the home side dominating. The first encounter at Well Hall ended in a 42-5 defeat for Cov, which is not recalled with any great pleasure, while Blackheath probably have similar views about the return which Cov won 39-3.

For Cov, the opening three weeks of the league season have brought big wins over Hull Ionians and Birmingham Moseley before a much closer result last week at Old Albanian in a match that proved once again that life is tough in this division and nothing can be taken for granted.

We know that Blackheath will be well up for the game.

Before the main game, Coventry Development take on Blackheath Heathens in a Zoo Sports Shield fixture, kicking off at 12.30pm.

Cov kicked off their campaign with a narrow 33-29 loss to Jersey Athletic last weekend, while Heathens have already played three games and have a 100 per cent record after wins over Ampthill 2nd (27-24), Cinderford United (22-10) and Richmond Saxons (3rd) 29-14.

Come along early and give our Academy young guns some real Coventry support. 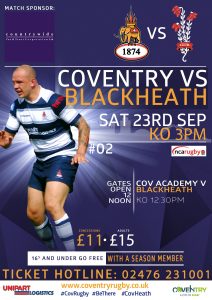