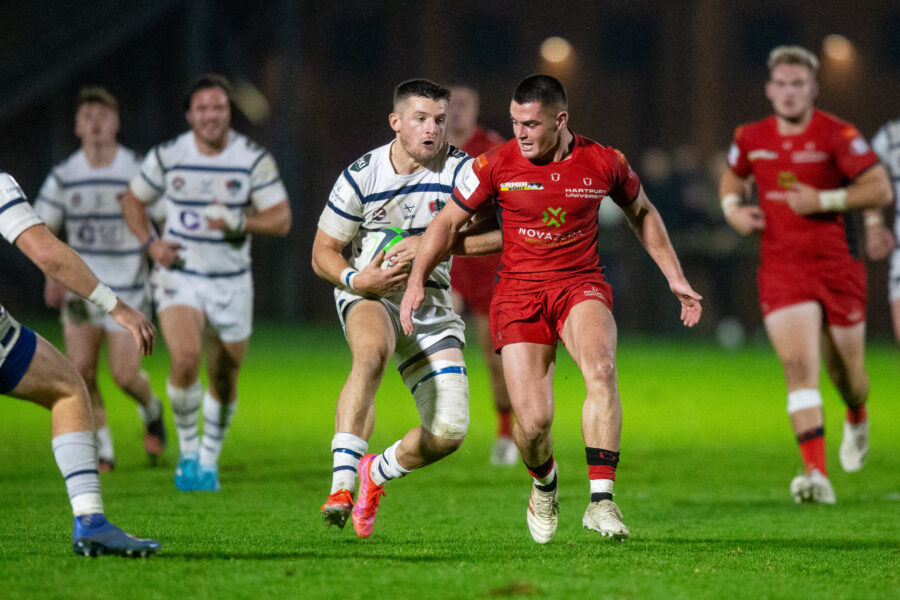 Host’s walk away with the win from Round 4 of the Championship, leaving Coventry with yet another bout of away game blues.

A high tempo game with plenty of opportunities, Hartpury brought the action and Coventry weren’t up to the challenge.

Coventry put in the hard work but lacked composure failing to convert opportunities at the last hurdle – a recurring feature in the last three games and something Director of Rugby Rowland Winter insists the side will look at and improve on.

“I think we’ve had three scrappy weeks,” he said. “We had a nice clean game against Doncaster and we looked good for it, looked good for the win, but to be honest, the last three weeks – I think it’s been scrappy”.

Coventry has appeared to be a shadow of the squad that overwhelmed Doncaster Knights in the season opener. Although a low-scoring victory was achieved against Richmond in Round 3, Coventry has seemed lethargic from the whistle, failed to handle errors and convert opportunities, leaving the team unable to translate dominance onto the scoreboard. Our current standings – two wins, two defeats.

“I think Hartpury deserved the game today” Winter admitted, “They brought a lot of physicality – they worked hard, they pressured us and we weren’t good enough to stand up to it”.

Both teams fought for dominance in the first twenty minutes of the game but handling errors proved costly for Coventry.  Having successfully evaded the run of play all the way to the try line it appeared that Coventry had finally got ahead of the game. Unfortunately, a forward-pass from Josh Bainbridge to Tom Howe caused the try to be excluded.

The first points of the game followed soon after for Hartpury from two penalties in the 22nd and 35th minute of play. James Williams executed both with ease and placed his team six points in the lead.

A man on a mission, “Josh Barton was the only player with a Coventry shirt on that had an outstanding first 20, 30 [minutes]” Winter recognised. This culminated in the 37th minute when Barton bound through the spaces of Hartpury’s defence achieving the only try of the game. Tony Fenner converted for the 7 points.

The determination of the hosts’ proved prosperous with a commendable finish from Sam Smith in the 40th minute of play. Williams was off the mark for this one and the ball pinged off the posts. The missed conversion left Coventry hopeful when walking off the pitch four points down and the visiting fans optimistic for a stronger second-half performance as witnessed in games prior.

The second-half appeared uncertain with a game of tennis pinging the ball from each side. Ten minutes in, the kicks were being charged down by Coventry and Hartpury were unable to get loose with ease. To the dismay of the visiting fans, Deago Bailey came out of nowhere, leaping over our try line in the 50th minute and James Williams successfully converted.

Ryan Burrows went on to lead a couple of barnstorming runs alongside a flurry of replacements from the bench, that hoped to replenish the squad’s energy but these were met with dropped balls and overturns. This resulted in the Red-and-Blacks ahead with what would be the final score: 18-7, after a missed penalty from Hartpury in the final minute.

In terms of injuries, Evan Mitchell returned to duty last week and James Martin last night, however, with other big names still missing from the lineup and not expected to return for some weeks, Winter is limited with options for the matchday 23.

Looking to the future, a bye week for Coventry next weekend provides critical time to reflect and improve ready for a big challenge on the 23rd of October to face Ealing Trailfinders at Butts Park Arena. Speaking on the matter, Winter said “I think we’re capable and talented enough to rise to that challenge. We’ve got a lot of work to do and a lot of things to focus on us and if we don’t do that it will be a tough day.”

You can buy your tickets for the Ealing game here.