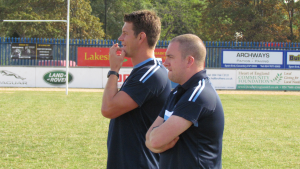 Coventry Rugby’s Rowland Winter admits the 43-21 win over Leinster Development was a challenging test for the squad but remains satisfied at the side’s development.

The 33-year-old has watched the midlands outfit score 17 tries in the two outings of pre-season action so far, and Winter praised the opposition after the Irish province put in a hearty performance.

He said: “It was a tough test, Leinster had a talented young group of players who clearly have a bright future ahead. They pushed us hard and kept pressuring us, which was exactly what we needed.

“We didn’t have everything our own way, which isn’t a bad thing as it’s good preparation for the tough battles we have lying ahead of us.

“We are delighted with the win, but we are all well aware that the performance still needs fine tuning further as we move forward.”

With the club to release a pre-season injury update this week, Winter believes that using a bigger squad during pre-season gives players the chance to impress him before squad selections are toned down.

He said: “We used 30 players on Saturday, which gives those selected the opportunity to put their hand up for inclusion for on Saturday when we’ll use close to a normal match squad against Wasps.”

After another solid performance from the team, Winter admits he was impressed by the squad who are starting to put training into practice on the field.

“Combinations are starting to work really well, and whilst we still have lots to work on, I am pleased the team are progressing well,” Winter added.

Team selections are becoming smaller and smaller by the week and with the younger players in the squad staking a claim for starting shirts, Winter admits he was impressed by a number of the Development Academy lads who featured.

He added: “We finished the game with Povoas, Betteridge, Gray, Hutchinson, Bitirim all performing well – which, alongside the successful U18s launch last week and an impressive win for the Development XV, shows that we have exciting young players of our own coming through.”