COVENTRY have a settled look as they prepare for tomorrow’s trip to Cambridge where they seek their fourth National League One double of the season.

There is only one change from the match-day squad of 20 that beat Ampthill &District two weeks ago with Max Trimble returning on the wing as Rob Knox moves inside to centre at the expense of Tom Wheatcroft.

The only other amendment to the starting XV sees Brett Daynes step up at blind side flanker in a change of roles with Darrel Dyer, who goes on to the bench.

“We’re looking at options so want to see how Rob goes in midfield alongside Heath Stevens and it’s an opportunity of game time for Max, so Tom loses out this week,” said director of rugby, Rowland Winter.

“The back row change is rotation, and with 19 of the 20 from the last game we have a settled squad as we try to get two away wins on the bounce which we haven’t had this season.”

There is a third successive start at scrum-half for Sam Grasso with Pete White, who was named as man-of-the-match for England Counties in the game against their Ireland counterparts last week, remaining on the bench.

“Sam has played the last two games and went very well against Ampthill,” said Winter. “Pete has had plenty of rugby, and he will have a lot of impact coming off the bench as will the rest of the replacements.”

Cov were 55-12 winners when the two sides met in November, dominating in the forwards, but Winter anticipates a stronger challenge this time round.

“We’re expecting a completely different game,” he said. “I think Cambridge had an off day when they came to us, they have the ability to perform and do well up front.

“They are a much improved outfit from then and a dangerous side.

“They will give us a tougher test this time, but we are confident that we can maintain our form as long as we stay fully concentrated.”

Meanwhile, injured fly-half Tony Fenner’s rehab has gone well and he is back with the squad and ready to work his way back into full training.

Tom Little looks at the rest of the weekend’s National League One programme.

LEAGUE fixtures resume after a week’s break with chief interest turning to who will take the two relegation spots. All four bottom sides face difficult away games with no-one expected to win, so it may come down to losing or try bonus points. With the title race already decided, this week’s previews start at the bottom of the table.

Bottom side Macclesfield gave themselves a glimmer of hope two weeks ago with a win, but now have to travel to fourth-placed Birmingham Moseley, whose form has been inconsistent of late, but at home should be still too strong for their visitors. Moseley will also be mindful that they are now only six points ahead of the chasing pack.

One of the other sides looking for an escape hatch is Hull Ionians who face an equally daunting trip to third-placed Ampthill & District. Hull came back last time out to earn a draw with fellow relegation rivals Blaydon, whilst Ampthill were involved in a bruising battle in losing at Coventry, At home Ampthill should be too strong, but Ionians cannot be written off as they do have finishers if they can nullify the home pack. In reality, the best Hull can hope for is a losing bonus point.

Just two points ahead of Ionians are Blaydon, who face a similarly tough task at second-placed Plymouth Albion. Recent results mean that Albion are now clear of their pursuers, and with Blaydon not always travelling too well, a resounding home victory is on the cards.

The other lower league side looking nervously over their shoulder is Esher who, whilst being trn points clear of the danger zone, cannot be too complacent as they also travel to Old Albanian. Not quite such a difficult tie compared to the other bottom sides and they will be buoyed by talking a point off Rosslyn Park, so the visitors do stand a chance of sneaking a win from an OA side which can be inconsistent.

Rosslyn Park will be looking to continue a good run when they entertain Fylde at the Rock. Last time out, Fylde were surprisingly beaten at home by Cambridge, and although they appeared to be blooding some youngsters in that game they will have to be at their best to get the better of Park who require the win to close the gap on Moseley and to keep Coventry off their tails. A resounding home victory should be theirs.

If Coventry slip up at Cambridge, then Blackheath could take advantage as they are only four points behind Coventry and although they have to travel to Loughborough Students , they should be slight favourites. Both sides have been inconsistent of late and it could go either way, with home advantage perhaps just swaying the odds.

Champions Hartpury College travel to Darlington Mowden Park for what is expected to be a full-on encounter. The quality of the College side should shine through, but Park at home can be a difficult proposition and if they play at their best, they could get something out of this game. 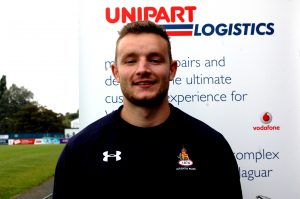