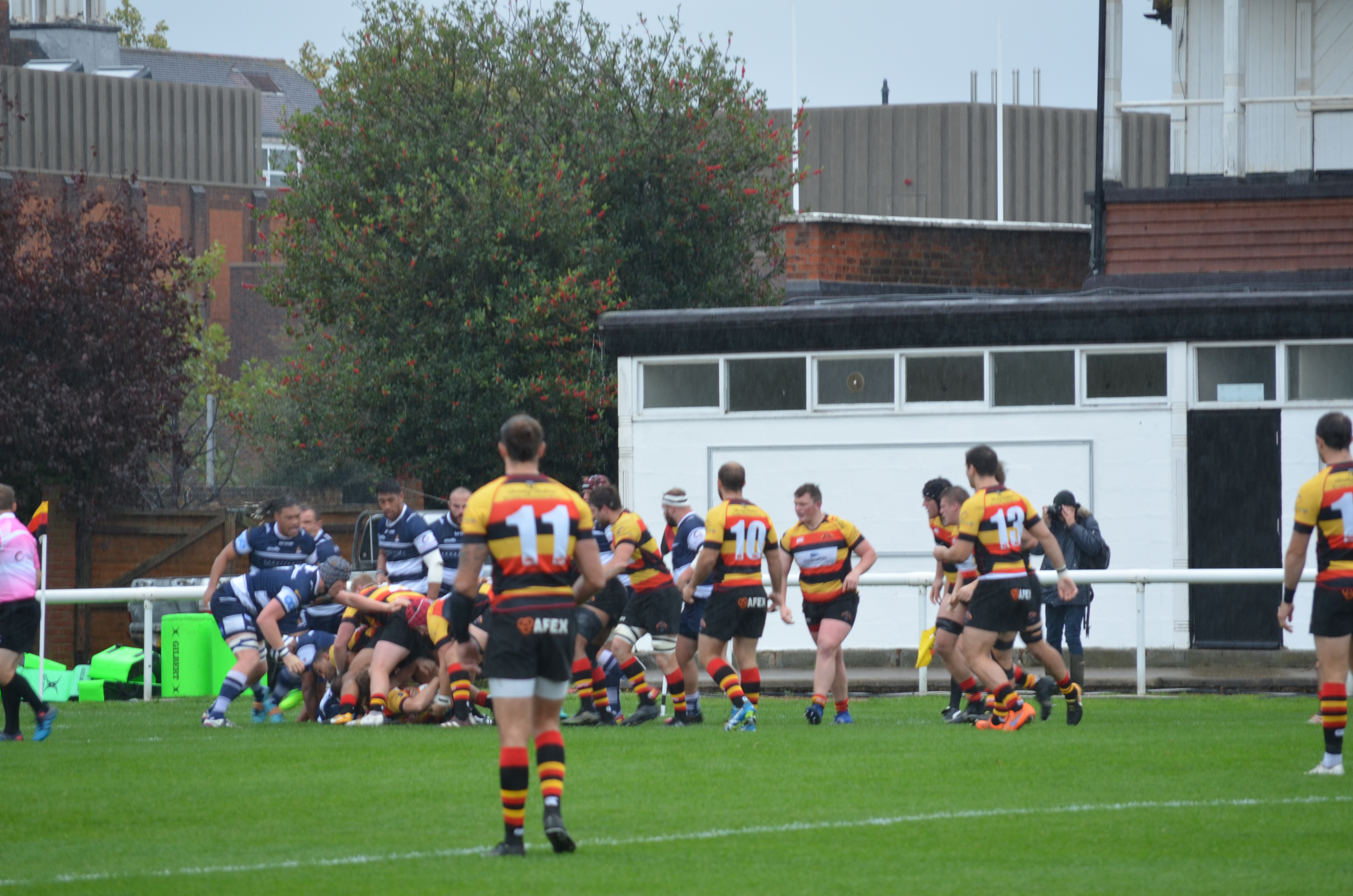 Coventry slipped to a 22-5 defeat at a rain-drenched Richmond Athletic Ground against hosts who claimed three tries to the visitors’ one.

The first of these, finished by prop Will Goodrick-Clarke, enabled the hosts to build an eight-nil interval lead.

Coventry got off to an untidy start as a loose lineout tap saw Richmond camp in their 22 then drive Goodrick-Clarke over for the opening score.

Cov seemed certain to provide an instant response after forcing their way into the home 22 only for their driving maul to be held up on the home line.

Richmond then forced a couple of scrum penalties, the second of which took them into the shadow of the blue-and-white posts before some good defence forced Luc Jones to chip dead.

Tight head prop Charlie Beech was forced off early in the second quarter, to be replaced by Luc Jeannot, and the visitors immediately turned possession over at a Richmond attacking lineout.

Adam Peters and Latu Makaafi combined well to steal home possession on the Cov 22 and release Heath Stevens. His powerful carry took the game to halfway before a handling error ended their progress.

Understandably in the conditions, both sides were making plenty of mistakes, which meant little flowing rugby and when Cov were penalised for lineout obstruction home full back Rob Kirby extended his team’s advantage to eight points.

Kirby then found 50 metres with an excellent angled kick into the visitors’ 22, but the visitors disrupted well and were then awarded a penalty when their one-time No.8 Ed Milne was penalised at a midfield maul.

As half-time approached, Will Maisey was narrowly wide with a 38-metre penalty attempt after referee Ian Tempest adjudged the home side offside in midfield.

Now playing with the elements, Cov countered through Sam Tuitupou’s chip-and-chase which gave his pack the chance to drive a lineout deep into home territory. A series of forward drives later, Tom Kessell’s floated pass sent Andy Bulumakau into the corner.

Cov’s most fluent move of the match then saw David Halaifonua combine with Bulumakau and Jack Ram down the left wing only for the hosts’ scramble defence to snuff out the danger.

However, Coventry soon won a penalty at a midfield breakdown, but Maisey was short with his 48-metre attempt.

Intervention from the touch judge then saw Coventry prop James Gibbons shown a yellow card for foul play, and Richmond pile on the pressure through their forwards.

The visitors held the hosts’ first drive, but from the ensuing five-metre scrum flanker Liston went over for a try which Kirby upgraded via the upright.

With 15 minutes remaining, Rowland Winter emptied his bench in search of some late momentum.

Tuitupou then slipped running out of defence and was penalised on the ground, but Cov were handed the slimmest of lifelines when Kirby’s penalty attempt hit the post from 40 metres.

But undeterred, the home side controlled territory in the closing stages, and eventually Davies finished off a scrum pushover which Kirby converted.