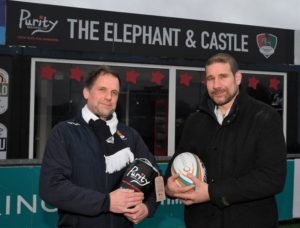 On the left, competition winner Paul Smith, and on the right, Purity Brewing Co. Director of Brewing Flo Vialan

Multi-award-winning brewery Purity Brewing Company is delighted to announce the name of the real ale bar at the home of Coventry Rugby as The Elephant & Castle.

As part of the Warwickshire based brewer’s partnership with Championship side Coventry Rugby, Purity has completely renovated the supporters bar at the Railway end of Butts Park Arena. The fresh new look incorporates a wallpaper design inspired by the players and the Pure Quality of rugby the club have shown over the last few seasons as they have established themselves in the Championship.

Purity has worked closely with Coventry Rugby to create a space for supporters to enjoy a perfect pint of Pure Gold or Pure UBU with one of the best views of the action on the pitch. After the renovations and work to improve the experience in the bar Purity felt it was only right that when it came to naming the bar that those who will be using it most get the opportunity to name it.

In a two-part process, supporters were first invited to submit their suggestions, with the best three then being put to a public vote.

After much deliberation and discussion, the shortlist was between the 1874 Bar (the year the club was founded), the Up & Under, and the Elephant & Castle, representing the two key features on the Coventry Rugby crest.

The Elephant & Castle are also synonymous with the Coventry as a whole, entrenching the links between the club, city and one of the region’s most recognized brewers.

Since 2005, Purity have become one of the market leaders in the Midlands for modern day beer and this new bar follows the recent announcement of the new Pure Legends Lounge at the Ricoh Arena and Purity’s exciting new partnership with Aston Villa FC.

Purity CEO and Co-Founder, Paul Halsey, a former rugby player himself, commented: “We are delighted to be able to offer Coventry Rugby fans a true Pure Quality experience on match days to complement the quality action on the pitch. I really love the name that was chosen as it sounds like a proper pub name while supporting the history and heritage that is linked with the club and the city of Coventry. What we have strived to achieve is to offer a perfect pub environment for fans to enjoy great beer and great rugby. I cannot wait to join the supporters in the Elephant & Castle for a Pure UBU as the blue and whites push at the top end of the table.”

Nick Johnston, Coventry Rugby’s Managing Director added: “This initiative showcases exactly what we’re looking for at Coventry Rugby. It has a commitment to improvement and delivering an outstanding experience from one of our key partners, an engagement with our loyal supporters who are the heartbeat of the club, and the name builds on the history of the club and city as a whole.

“We were delighted that Purity came up with this initiative and are looking forward to working closely with them in the future.”

Purity Brewing are proud partners of Coventry Rugby and have been pouring their award-winning cask ales at the Butts Park Arena since 2015. Having renewed a supply agreement in the summer of 2019 Purity is an integral part of the match day routine and experience for Coventry supporters. Following feedback from supporters and demand joining Pure Gold and Pure UBU across the stadium, Mad Goose keg is now available in the Millerchip Suite and Jon Sharp Bar. Purity will be working with the club to build on the success of the partnership and offering other fan engagement schemes as the season heads into its key final few weeks and beyond.