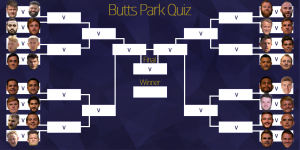 32 players will try to battle their way through a straight knock-out round competition by answering a range of general knowledge questions.

Two ties will feature each week on a Tuesday and Thursday afternoon, so make sure you keep up to date with who progresses to the Last 16.

Will Maisey, Jack Preece, Ben Adams and Tom Jubb all took part in the Draw for the first round of 32 where players will be asked five questions on a range of topic areas.

Tom Kessell vs Will Maisey