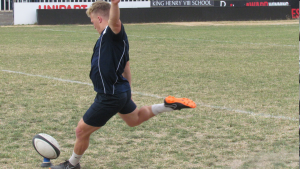 Coventry Rugby announce an update on the Player Development Loan plan with the Development Academy squad being sent out to a range of clubs varying from National One, Two and Three to Midlands Two.

Rowland Winter believes the players that have been loaned out will gain valuable game time and experience from other clubs and insists it will make them stronger players for when they return to Coventry to play Development Academy fixtures during the 2018/19 season.

He said: “A number of Development Academy players are increasing their playing experience by gaining valuable game time with our partner clubs. The mixture of training with the senior squad and then training and gaining regular competitive league rugby with a loan club creates a good stepping stone towards playing senior rugby here.

“It’s important that they are tested at an appropriate level for their development, and are getting plenty of game time to remain sharp and confident for when they are called upon for the senior league or cup games.

“All players will return for a Nighthawks game at least once a month, and will be joined by senior squad players who need to additional game time.

“Ross Stewart’s role involves working closely with each player to assess and analyse their games, and I will review whether they need to be at a different level at the end of each month