Oh what a night!

WHAT a great way to bring down the curtain on another season!

Players, staff, family, friends and supporters joined club chairman Jon Sharp and president Peter Rossborough at Butts Park Arena to enjoy an evening of celebrations, kicked off by an inspirational talk from Coventry-born and bred explorer Mark Wood who spoke of his expeditions to the North and South Poles and Mount Everest, his work with schoolchildren across the world and to highlight the reality of global warming and its effect on the Arctic Ocean.

A new award for the Coventry Rugby Supporters’ Club Travellers’ Player of the Season – based on man-of-the-match polls on the CRSC coaches to away games – went to Pete White.

The Clubman of the Season award was presented to Brian King, for his unstinting work on behalf of the club through the week and on match days, home and away.

Darrel Dyer’s score in the home game against Macclesfield was voted try of the season; Max Trimble and Tom Howe shared the honour of finishing as leading try scorer; and there were special presentations to Tom Poole and Cliffie Hodgson who both reached the milestone of 100 appearances for Cov during the season. 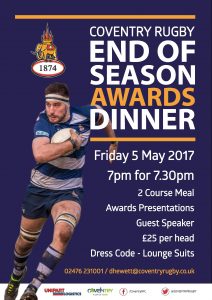