Nile extends his stay and captains Cov against OA

COVENTRY Rugby is delighted to confirm that second row forward Nile Dacres has signed a two-year contract extension running until the end of the 2019-20 season.

The 26-year-old England Counties cap, who joined from Plymouth Albion in the summer, will captain the side for the first time in tomorrow’s game against Od Albanian at Butts Park Arena (kick-off 3pm).

Dacres has started 14 of Cov’s 15 games so far this season, forging a strong partnership in the second row with George Oram and taking on the role of line-out caller, and has played a significant part in the team’s winning run which sees them 13 points clear at the top of National League One.

“Nile has grown as a leader throughout the season and epitomises what we’re about as a squad and a club,” said director of rugby, Rowland Winter.

“He has been one of our most consistent performers and the captaincy tomorrow is a reflection of how much he has developed over the last four or five months.

“We are delighted that he will be staying with us as we continue to develop and move forward.” 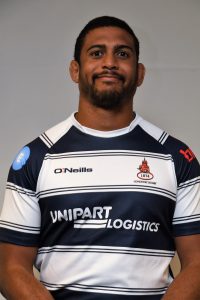 Dacres leads the side tomorrow with Phil Boulton and Luke Narraway both sitting out the game against an Old Albanian side next to bottom in the table but who pushed Cov all the way when they met in St Albans in September, the visitors winning 21-19 in the closest call they have had so far.

Cov make a total of five changes in personnel from the 20-man squad that beat Birmingham Moseley last time out with centre Sam Tuitupou and prop Jack Higgins joining Boulton and Narraway on the sidelines while scrum-half Tom Kessell has returned to Northampton Saints.

There is a full debut for Development Academy prop Luc Jeannot after three replacement appearances in a changed starting front row alongside returning Nathanael Titchard-jones and hooker Phil Nilsen, with Jimmy Litchfield and Scott Tolmie going to the bench.

In the back row, Olly Povoas takes over from Jack Preece, who is on the bench, at open side with Brett Daynes stepping up at No.8.

Pete White completes his return from injury at scrum-half alongside fly-half Tony Fenner, with Will Maisey going on to the bench where Tom Emery returns. Fraser Dingwall, who was named this week in the England Under-20s squad, replaces Tutupou at centre.

Said Winter: “Luc has really impressed in training and has done exceptionally well in the A League for Northampton Saints who are unbeaten all year, and he deserves his start.

“Olly will play a big part for us over the next few years, we want to get him back in the side and playing, and Jack has had a lot of game time.

“Sam is rested this week. Fraser will be with England Under-20s for the majority of the next ten weeks, he has also been playing well in the A League for Saints, and we will look to play him when we can.

“It was a really tough game down there, and we were complacent and not as accurate as we should have been.

“Coupled with an unacceptable second-half performance against Moseley, we want a big week this week.

“OAs are unpredictable to play against because of their involvement with Saracens, it makes it difficult to predict what’s going to happen, so we’ll just prepare ourselves the right way mentally to do our job and not take anything for granted just because we are at home.

“We’ve got a big month ahead of us, teams can get caught out after the Christmas break, we just need to go back to basics and focus on what we need to do.”

Scrum-half Dave Brazier and centre Alex Grove are both back in full training after long-term injuries and have been named in the match-day reserves for tomorrow, while prop Andy Brown and lock Tom Poole are close to a return and centre Heath Stevens is set to start straight-line running next week as he continues to recover well from a broken leg.

Kick-off at Butts Park Arena is 3pm, and live post-match entertainment in the Arena Bar will be provided by The Jellyheads.

THE start of the New Year sees leaders Coventry Rugby at home to15th-placed Old Albanian, whilst challengers Darlington Mowden Park are away at Cambridge with Plymouth Albion at home to Bishop;s Stortford. Apart from OA, there are key games involving another five sides at the wrong end of the table.

Darlington Mowden Park,  second and 13 points behind Coventry, face a potentially difficult away trip to Cambridge who are now in the top half of the table. The home side can be inconsistent but are capable of giving most teams a close game, so DMP cannot be complacent. At their best Park should be capable of a bonus point win, but it may be closer than some expect.

Waiting for any slip up by either Coventry or DMP are third-placed Plymouth Albion, who host one of the surprise teams this season, Bishop’s Stortford. A well-coached and organised BS are now up to sixth place in their first season in NL1and have the ability to cause problems for most teams. Another game that Albion will have to be on top form to gain their required bonus point win.

Two sides now surely out of the promotion race, Ampthill & District and Blackheath meet in Bedfordshire having both recently fallen off the pace. Fourth against fifth is a difficult game to predict with Ampthill slight home favourites. A loss for either side will banish any lingering title pretensions.

Old Elthamians, safely ensconced in the top half, have bottom side Fylde as their visitors. Unless OEs take the game too lightly they should be odds-on for a sizeable home win which will help to put down a marker for their ambitious future plans. With Fylde now 12 points from safety, chances to avoid relegation are running out.

Another crucial game towards the bottom of the league sees 14th-placed Hull Ionians at home to ninth-placed Birmingham Moseley. The home side are in the third relegation spot, although only three points from safety, but despite being competitive in most games they have been unable to gain more than four victories. This is a game they need to win at home, but in Moseley they will find a team seemingly safe and confident after their second-half performance against Coventry. A close game is expected, but at home Ionians maybe slight favourites.

Another in need of a win are 12th-placed Loughborough Students who travel to Caldy, whose inaugural season in NL1 sees them only one win outside the top half. The Students are only five points above the relegation places, so this is a game they will target to win. At home, though, Caldy can be a force and with plenty of experience in their side a home win is on the cards.

Rosslyn Park and Esher meet at the Rock. Park are only three points and one place above the relegation zone, yet only four points behind Esher, so it is an important game for both sides. With both trying to avoid falling into the bottom three a close, and fraught, affair is expected, but Park with home advantage should have the slight edge.