Nile adds his power to the back five

ENGLAND Counties cap Nile Dacres is the latest exciting addition to Coventry’s squad of forwards for next season.

The club is delighted to welcome the 25-year-old, who joins from National League One rivals Plymouth Albion, to Butts Park along with other new signing, Coventry-born winger James Neal, while also confirming that James Stokes and Cliffie Hodgson have both signed contract extensions. 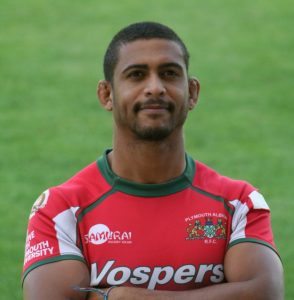 , who is equally at home in the second row or at blind side flanker, has played 53 games for Plymouth in the last two seasons and was named man-of-the-match in Cov’s game at Brickfields last month.

He began his senior career at Worcester Warriors, spending time on loan at Stourbridge, before gaining Championship experience at Rotherham Titans and then Moseley, where he played 24 games in the 2014-15 season.

“Nile will be an excellent addition to our pack,” commented Cov’s director of rugby, Rowland Winter.

“He proved his quality with his outstanding performance against us last month, and he has been one of the best forwards in our league this season.

“His aerial ability will add quality to our line-out, and although he is most comfortable at blindside flanker, he has played very well at second row for England Counties recently.”

Neal cut his rugby teeth at Kenilworth, where he played through the mini and junior age groups before joining Rugby Lions Colts.

An England Counties Under-20 cap, he has been studying for a degree in Physical Education Teaching & Coaching at Hartpury College, figuring regularly in their BUCS side and playing six National League One games last season.

Said Winter: “James is an exciting talent who is comfortable across the back three and with National One experience and a strong skill set developed from his five years at Hartpury.

“As a local lad who we have been keeping an eye on, we are delighted he is joining his home town club.”

Dacres and Neal have both signed one-year contracts and bring the number of confirmed new arrivals to five, joining Jack Preece, Alex Grove and Latu Makaafi.

Stokes, another member of the England Counties squad this season, and Cov’s record league points scorer Hodgson have both extended their stay by another season.

“We are delighted that James and Cliffie will be with us again next season,” said Winter.

“Cliffie is a creative player who brings other players into the game, and he can do this from full-back or in midfield.

“James adds real pace to our back line and constantly threatens the defence whether on the wing or at full-back.

“We expect more from both players next season and we are looking forward to them helping the team to kick on.”