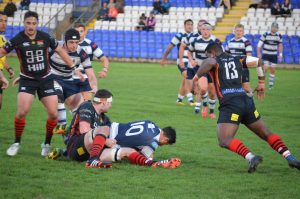 National One side Cambridge came away with a 15-14 win at Butts Park Arena as the Nighthawks fell short after a strong second-half comeback.

The Blood and Sands took a convincing lead with a Sam Yawa Yawa try followed by three points from the tee with Jack Green stretching the lead before loanee Kwaku Asiedu found the whitewash after a monstrous hand-off.

Ben Plamer broke the deadlock for the hosts just after the break and this was followed up by a Jack Preece score to bring the side within a point, but it was not to be on the day.

Both Coventry and Cambridge were physical from the off, big hits coming in from the likes of Cameron Gray and Ben Adams to disrupt the Blood and Sands getting quick ball.

The Blood and Sands were the first to penetrate the try line, good work from Ben Ibrahaims allowed quick ball and Yawa Yawa snapped at the chance to race over.

Yawa Yawa continued to make a nuisance of himself in midfield with Cambridge making a switch of possession for the speedster to choose his line and execute the gaps.

Cov struggled to get going in the opening quarter of the game with Cambridge pinning the hosts back in their own 22.

Taking advantage of their dominance, Jack Green slotted a clean penalty through the sticks after an infringement at the ruck.

The Blue and Whites looked to be gaining some confidence in possession but after giving the ball away at the lineout, Cambridge countered and Cambridge loanee Asiedu fended off his man to go under the posts.

The visitors continued to excel with their attacking style but Cov held off every lasting attack and also managed to show off some attacking spells, but the scoreline remained the same as the sides went into the break.

After the break and having made some changes to the side, Ross Stewarts men started to produce key plays which allowed Jake Sharp to manoeuvre the ball.

Ben Palmer was the beneficiary when Ben Gulliver won clean lineout ball at the set piece which set up the inside centre to muscle his way over from close range.

The game was soon sparked back into life as Cov seized upon a strong spell of pressure in the Cambridge 22 where the forwards recycled well and creeped closer to the line.

Preece added Cov’s second of the match after wrestling his way through two defenders to go over and Jake Sharp brought the Blue and Whites to within a point of the visitors.

In the latter stages of the match the Nighthawks managed to muster a spell of pressure in the Cambridge 22 but nothing came of it and the visitors came away with a well earnt victory.