Nick Walshe – “We are not here to make up the numbers” 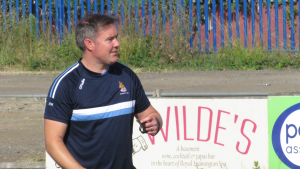 Coventry Rugby Head Coach Nick Walshe is confident the side can impress this season in the Greene King IPA Championship.

With 14 new additions and expectations building around Coventry’s campaign, the former Gloucester backs and attack coach is aiming for the side to win as many games possible this season.

He said: “We want to be competitive, we are not here to make up the numbers next season so I’m not going to predict where we will finish but I’m expecting us to go well and that is what we are preparing for.

“I hope there is anticipation and excitement, but we are going to do absolutely everything we can to finish as high as we can.

“It’s going to be really tough, but we are ready for the challenge and the boys are working hard so we will give it our best shot.”

The 43-year-old believes the side are preparing well during pre-season despite training under the heat at Butts Park Arena.

He said: “They are all training really well and really hard. We have put a lot of detail in straight away from day one and we had to because we gave them more time off.

“They are really enjoying it and they are working hard. It’s the same for all teams around the country at the moment, they are all training in the heat and the hard ground, so it will be tough, but we just have to get on with it.

“We will soon start to moan if it’s raining so we might as well enjoy the sunshine.”

“It’s going to be tough, we know that. We are under no illusions, just because we won National One pretty easily last year it’s a big step up,” said Walshe.

“It’s our job to get this squad as prepared as possible for the start of the season and then we have to take each game as it comes.”

The Blue and Whites pre-season schedule has been underway at Butts Park Arena and despite the heatwave, Walshe believes it hasn’t affected the side.

“We are coming up to a bigger, tougher, fitter league and we need to be up there and competing, so yes the boys have been putting a lot of hard work in and they do get enough recovery time as well.”

Despite the challenges that lay ahead of the historic midlands club, Walshe is looking forward to the pre-season schedule but reiterates how big the Jersey game will be.

He added: “We have a couple of weeks left before we play our first game, so it’s come around quickly, but we wanted that, we didn’t want pre-season to drag on.

“We wanted to be intense with everything that we did but look we have some tough games in pre-season.

“Bishop’s Stortford, they went really well last year, and Moseley are big competitors of ours who are keen to show that they are improving and then the big ones Leinster and then the even bigger one with Wasps when we play them here.

“We will be well prepared for Jersey in our first game. We have just got to try and make sure we perform well in those games and the biggest thing is that we perform well against Jersey.

“As long as we keep improving through pre-season to see how we do but obviously the big one is that Jersey game.”