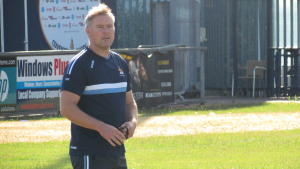 Coventry Rugby Head Coach Nick Walshe was delighted with the Blue and White’s 20-15 win over Jersey Reds on Saturday which secured a winning return to life back in the second tier.

The 43-year-old admits the side did well to deal with an experienced Jersey Reds side and praised the side after an ‘unbelievable’ second-half performance.

He said: “It was unbelievable. Jersey came and did what they are really, really good at, they scrummed well, mauled and we were twelve nil down and I knew we hadn’t gotten into the game yet.

“I felt is we could get a bit of ball and some territory then we would be alright but yes, what a start to our Championship campaign.”

Coventry crossed the whitewash on four occasions during the match, two of those were disallowed, once for James Stokes dropping the ball over the line and the second, Heath Stevens going over after a forward pass.

He continued: “It was everything we knew they would bring, and I knew that if we got a bit of ball as we did and unfortunately with James Stokes dropping the ball over the line and we scored another one that was a forward pass, so I could see it coming and then obviously we scored and got back into the game at halt-time.

“I think the crucial thing was just before half-time, when we were under the pump with 13 men and we held out so that spirit is just absolutely everything we need.”

The side fought back heroically with a dominant second period and despite being down to 13 men for ten minutes, Walshe believes the side’s spirit and character were exactly what the coaching team expect.

He said: “Firstly, we had to scrum on our own line with six or seven men and had to defend our line with 13 men and it was a great turnover from Ben Adams and we went in at half-time only two points down and I think it was quite psychological.

“Then we had to come out and work for six minutes with 13 men but then I felt as we got parity back in numbers, I could see us growing and I really felt that we deserved one or two more tries from this game but that is encouraging because we have shown what we need to do in this league, the physicality and everything like that, the attitude and then I know on top of that we can hopefully score some trues but to get that win was unbelievable.

Over 2000 fans attended the sides return match to the Greene King IPA Championship on Saturday and Walshe praised Coventry’s fanbase for their overwhelming support.

He added: “Of course, our fans have been fantastic and what a game, I was on the edge of my seat and I think everybody else was, but I just think its credit to the lads and everyone here just to put that performance out first up. You feel so proud as a head coach and it was brilliant.”