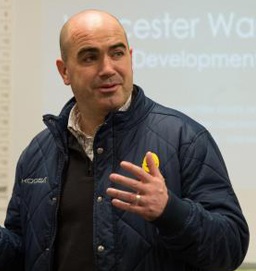 Coventry Rugby are delighted to announce the appointment of Nick Johnston, of NJ Performance and Athletic Thinking, to the newly created position of head of strategic development.

With an in-depth knowledge of the game, an impressive background in elite high-performance sport and his work in the corporate sector Johnston, 46, will be responsible for managing the development of the Butts Park Arena infrastructure.

“It is an exciting time at Coventry Rugby, on and off the pitch we are making great strides forward, and it reflects the enthusiasm and growth within the city of Coventry.

“We are also at an important stage of our strategic development plan with the progression of the Butts Park Arena site, and Nick’s experience and track record will give us strong guidance as we continue our journey.

“I believe this appointment shows our intent, just how seriously we are taking our newly-promoted Championship status and that our ambition doesn’t stop there. Nick’s role includes the objective of creating a new stadium and playing surface which sit at the heart of the Coventry community but is also ideal for high-performance sport.”

Johnston’s background and track record in driving clubs forward to success is second to none. He was head of physical preparation at Sale when the Sharks won the Premiership in 2006, and continued that success as performance director with Northampton in a six-year spell of unprecedented achievement. During this time the Saints followed promotion from the Championship by winning the European Challenge Cup, LV=Cup and reaching Premiership and Heineken Cup finals prior to becoming English Champions in 2014.

More recently Johnston was a key part of Worcester Warriors’ promotion from the Championship to the Premiership as high performance director, a role that masterminded the re-development of the training and performance facilities at Sixways Stadium and transformed their academy pathway.

Johnston said: “I’m really keen to get started. Coventry Rugby are in a great place at the moment and the city itself has been awarded many high-profile events for the future. Jon’s vision for the future is exciting and I am looking forward to working with local partners to create a state-of-the-art multi-sport facility for club and community.”

Director of Rugby Rowland Winter added: “Nick’s experience and knowledge of high performance and strategic development in both sport and business will be a great addition to the club. I have always been impressed with Nick’s work and I am looking forward to welcoming him to Coventry and working more closely with him”