Coventry secured a fifth-place finish in the Greene King IPA Championship table thanks to a six-try bonus point win at Richmond which showed attacking flair, forward grit and plenty to keep the coaches on the edge of their seats!

Capitalising on the perfect conditions at a sun-drenched south-west London, both teams set out their stall early. Richmond had a half-chance in the opening minute when Will Kaye wriggled out of a tackle to burst up the left touchline, followed almost immediately by Cov having the same on their own left flank, Will Butt put away by Louis Brown but fumbling in a good tackle.

Cov, too, were showing strength on the back foot, getting into Richmond faces to turn the ball over repeatedly. But they were not able to capitalise, losing a pair of good positions in the opening 10 minutes with overthrown lineouts, and another when Sam Aspland-Robinson was not able to get onto the end of an Adam Peters offload midway inside the home half.

Both teams were also forced into early changes, Richmond swapping their hookers and Rob Knox coming on for Aspland-Robinson.

One area where there was stiff competition was at the breakdown, with the teams sharing seven turnovers in the opening 15 minutes alone. And it was here where Richmond created the opening score.

Huw Worthington came through the middle of a ruck – questionably so, some in blue and white may say – but play went on, and when Alex Goble showed pace and patience down the right wing to put Luc Jones away the hosts had made the most of the overlap they had created.

Stunned, Cov went back onto the front foot, Brown twice weaving his way through the home defence, and Ryan Burrows, Peters and Nile Dacres offloading their way forward from a quickly tapped penalty.

And it was from a similar position from which Burrows scored, tapping a free kick five metres out and turning on the power to drive over. Tony Fenner’s conversion put Cov in front, but the lead was short-lived, Freddie Hosking latching onto a marginal pass from Jones to cut an angle and score.

It took four minutes for Cov to hit back, and they did so in style. Rob Stevenson was hit hard in a tackle, but still managed to offload to Jordon Poole. The hooker was in the clear but had no white line fever, drawing the defender to feed the supporting Ben Nutley. The flanker did the same, and when Brown got the ball it was a straightforward stroll to the line.

The full back was involved in the third try three minutes from the break. But so was Butt, and plenty of others, who followed up the centre’s break up the left wing to keep the ball alive and create an overlap for Peters to cross.

There could easily have been a fourth try on the stroke of half-time, following Knox’s wriggling out of a tackle to get Cov onto the front foot close to the home line. Offload followed offload, but just as Nile Dacres was about to drive for the whitewash the ball came forward, Jones kicked into touch and the teams headed into the sheds.

The second half started the same way as the first with the teams sharing some harum-scarum play. Goble had a couple of chances to break up the right wing, and Stevenson tried to launch a counter-attack from his own line. But it was keeping it tight which paid dividends for both Richmond and Cov, driving mauls from lineouts to create second tries each for Jones and Burrows.

It was back to the wide stuff as the hour approached, and only a superb tackle from Kai Owen denied Richmond a try after the ball had been stolen from the base of a ruck.

Richmond were nevertheless the next team to add to their tally, Kirby landing a long-range penalty. But all this did was put Cov back in home territory, and after Stevenson had won the throw and Sam Lewis had driven to the 22, the visitors kicked a penalty to the corner. Richmond did their best to disrupt this drive but the pack stayed patient, Josh Barton directed the traffic and Luc Jeannot was over.

The sixth score was another to savour. Brown found Stevenson in the wide open spaces with a lovely cut-out pass and was there to take the inside ball when the winger drew his man. Three Richmond players converged on Brown, but Barton was there, too, to take the final scoring offload. 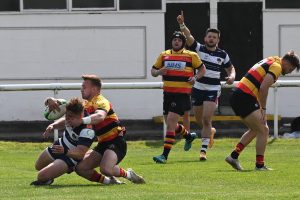 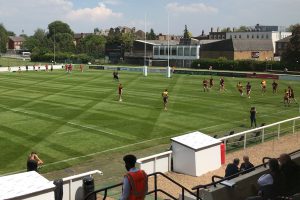 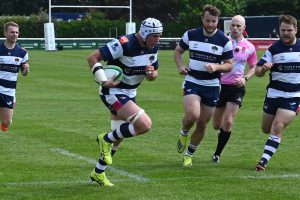 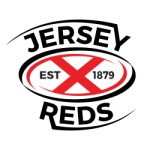