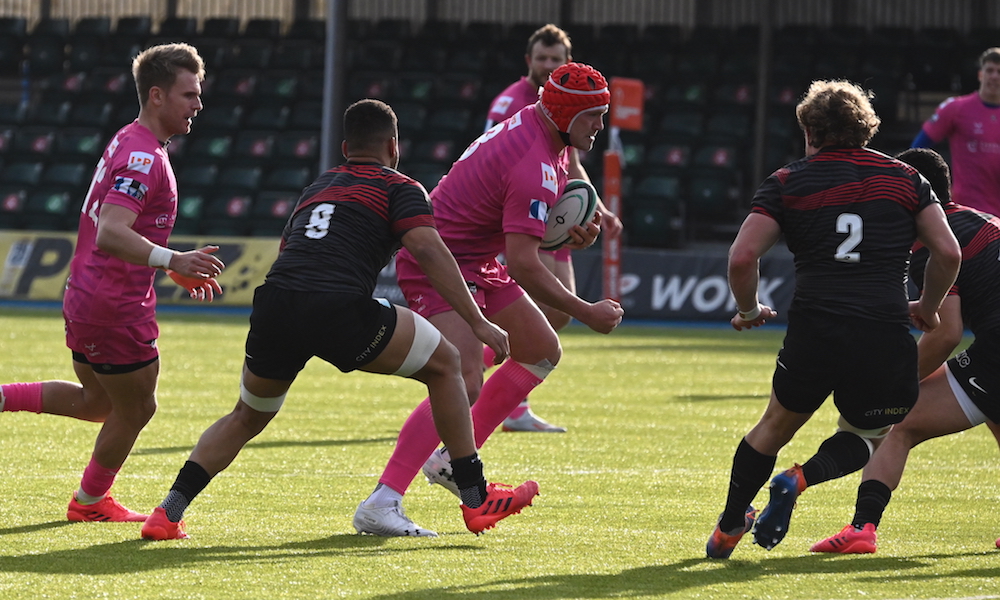 Coventry Rugby headed home from their first visit to the StoneX Stadium with a loss, but they nevertheless earned plenty of credit for the challenge they posed to a Saracens match day squad which was packed full of experience.

Cov had the worst possible start, the kick off going straight through hands onto the deck, where it was scooped up by second rower Joel Kpoku, who headed straight to the left corner.

Manu Vunipola’s conversion attempt hit the right upright, but far from cracking Cov kept their heads together to play some patient phases with ball in hand. Saracens’ defence largely held firm, but when Sam Lewis got the ball on the right wing there was no one to match his power and the flanker was in the clear.

Tony Fenner was running the supporting line, but Lewis opted for contact, with James Harper also making good impact a couple of phases later. A penalty was kicked to the corner, as was a second, and this time Cov headed back to halfway with the points and a two-point lead, Ryan Burrows coming up for the try, Kieran Wilkinson landing a superb touchline conversion.

Cov stayed positive, Fenner and Wilkinson spreading the ball wide regularly, and the visitors dominated possession, if not position, for the next 10 minutes.

This time Saracens’ line remained unbroken, and thanks to a trio of penalties conceded in relatively quick succession the hosts were soon deep in the red zone. To their credit Cov’s rearguard remained solid in the middle of the field, but ultimately too many defenders were pulled into the play, leaving Sean Maitland on his own on the left wing, the British and Irish Lion dotting down unopposed.

But back came Cov once again, and when a host of Saracens were caught offside from an Aled Davies box kick on their own 22, Wilkinson kicked to the corner and the pack did the rest, Nic Dolly this time coming up with the ball for his third try in two weeks.

Play switched to the other end of the field on the half-hour, where Cov did superbly to hold Saracens out, although they were helped considerably by a Tom Woolstencroft overthrow which ended with a massive kick downfield.

This got even better with a home fumble which handed Cov a scrum in the Saracens 22, and patient and powerful phase play was rewarded by a try scored by Ben Nutley between the uprights, Wilkinson adding the straightforward conversion.

Saracens should have scored almost immediately, Andy Christie denied a stroll to the sticks by a forward pass. But a pair of quickfire tries from centres Dom Morris and Duncan Taylor – both converted by Vunipola – meant that the hosts went into the sheds leading 24-19.

The second was one for the highlights reel. Spotting an overlap on the left wing Saracens span the ball wide to Maitland. His pace took play to the 22, and while Louis Brown was there to defend he was the final man and the simple pass put Scotland international Taylor over.

But what Saracens could do in the first half Cov did in the second, Nile Dacres grabbing the loose ball from the kick off eagerly to crash over by the uprights. And when Wilkinson split the home defence with a step and go to send Pete White in for a try the visitors were over the 30-point mark and with a nine-point lead as well.

This was reduced by seven courtesy of a close-range Richard Barrington try and Vunipola conversion, and when Barrington repeated his feat a minute into the final quarter Saracens were back in front.

The lead went into double figures thanks to Kapeli Pifeleti’s close-range effort, with the try compounded by a yellow card shown to White for a deliberate knock-on in midfield.

With 10 minutes to play Cov’s challenge was made all the harder by Christie running the ball in from 30 metres, and so it proved.