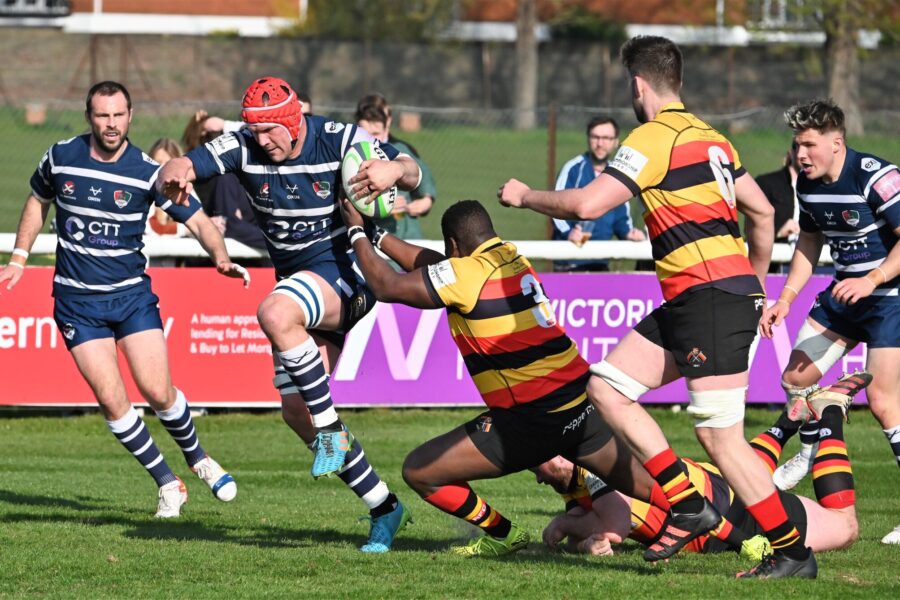 Coventry turned up trumps yesterday in their postponed fixture against Richmond (originally set to take place in January). The Blue-and-White’s proved their away win against Bedford wasn’t a fluke by achieving a six-try triumph for Ryan Burrows final league showing of his career and the final game of the season.

Richmond started the game two points ahead of Coventry in the league table – adding an extra layer of determination for Cov to claim the points needed to finish higher in the hotly contested Championship mid-table. Despite the absence of Seitiki Nayalo who was called back for Army duties, Coventry fielded a strong side that saw the return of Matt Johnson from Exeter Chiefs.

The game kicked off to almost perfect rugby conditions in sunny London and Coventry went straight into attack mode, passing wide and nearly scoring in the corner in the opening minutes of the game.

The travelling Coventry faithful would have to wait another fifteen minutes to see the first try of the game, however, after Richmond got the whistle for not releasing. Rob Knox kicked for the corner and the pack moved like clockwork from the lineout. Coventry shifted the ball wide and found Ryan Burrows in the far corner. Robust Burrows proved a challenge for the hosts to take down, as he bound over the line with a couple of Richmond men attached at his hip. Burrows last even league try wasconverted byEvan Mitchell for the full seven points on offer.

In almost an identical fashion, it wasn’t long before ill-discipline reared its head again for Richmond and Coventry claimed the points from the advantage. Nearing the half-hour mark, Richmond got caught offside, allowing Cov to try their luck in the corner once again. Spinning the ball wide found the hands of Rob Knox this time, who darted over the line to place Coventry two tries ahead in the competition. Mitchell again with the extras.

Richmond made good inroads from the restart and a break from James Kane got his team into the 22. Jared Cardew then faked a dummy and sliced through Coventry’s defence for his team’s first try of the game. Kane handled the conversion well which reflected 7-14 on the scoreboard as 30 minutes stuck on the clock.

Making the most of their opportunities, just a few minutes later Coventry collected a box kick and charged through Richmond’s defence to score from 25m out. Josh Barton had a small fumble but found his feet just in time to roll over the line as he was taken down, try converted by Mitchell.

The following seven minutes of the first half saw Richmond have their fair share of chances but the only real opportunity for either side came in the final minutes with Kane once again kicking deep into Cov’s 22 which resulted in an attacking line-out for the visitors, 25 meters out. Richmond threw a loose pass, Cov collected and booted up the pitch. Although appearing threatening in their attack, the clock ran out before anything could come of the opportunity as the ball rolled into touch and the whilst blew. HT 7-21.

Richmond came out of the changing rooms firing with Kane supplying another opportunity for his team. Kane kicked the ball back at Coventry from deep in his half to find touch and a 50/22 just five meters out. Richmond go the distance from the line out and looked to have the try but the team was called back by the ref to take their penalty, kicking to the corner for another lineout. A strong Cov defence forced a turnover and resulted in a Coventry scrum to which they eventually escaped with a penalty and kicked clear of any danger.

Richmond’s patience would pay off, however, as they bagged the first try of the second half not long later. Coming from a rare jackal and penalty, Mark Bright tapped to go, before sending the ball to Cardew who beat the defence and charged over for his second, conversion added by Kane.

Coventry was quick to respond – just three minutes later in fact, as Louis Brown hot stepped his way through Richmond’s defence, making up 40m before drawing a bonus-point scoring pass to Josh Bainbridge beside him. Inevitably, Mitchell slotted the conversion.

With the pack now bolstered by the replacements of Tony Fenner, Dan Babos, Fred Betteridge, Luc Jeannot and Jake Bridges, another breakaway by Brown had Coventry looking good for another, but a loose pass would have Brown kicking himself as the ball was then stolen by Richmond in the danger zone.

Although Richmond had now lost their star man Kane due to a nasty facial injury, they regrouped and made the most out of their next opportunity in the 68th minute. After Coventry was pinned for a poor lineout, both teams packed down to scrum which was then met by another penalty given away by Cov and Richmond then kicked for the line. Spreading the ball wide would prove successful for Richmond too, allowing Will Kaye to easily score in the corner and converted by Edward Landry.

With ten minutes on the clock and only seven points between the two teams, the final two tries by Coventry were not only well needed but well-executed too.

The first came in the 72nd minute, with Louis Brown dazzling the defence with his dancing feet once again, shrugging off a tackle to draw to Tony Fenner for a converted try.

The second came from skipper Ryan Burrows and was scored by Dan Babos – although no conversion for the sixth and final try, Coventry had the game decided by extending the gap 21-40 in the space of five minutes.

Playing for pride, Richmond scored a fourth try in the final minute to wrap up the game FT 28-40.

Hear Alex Rae’s reaction to the game below.

Although the 2021/22 Championship League season is now wrapped up, there is still plenty on offer at Butts Park. Coventry U23 are matched with UK Armed Forces U23 for a friendly at Butts Park Arena next Friday as part of the new #NextGen fixtures which showcase the talent in Coventry Rugby’s ranks. The first team then get underway with the Champ Cup against Ampthill – Away: 9.04/22 / Home: 23.04.22. Get your tickets here.