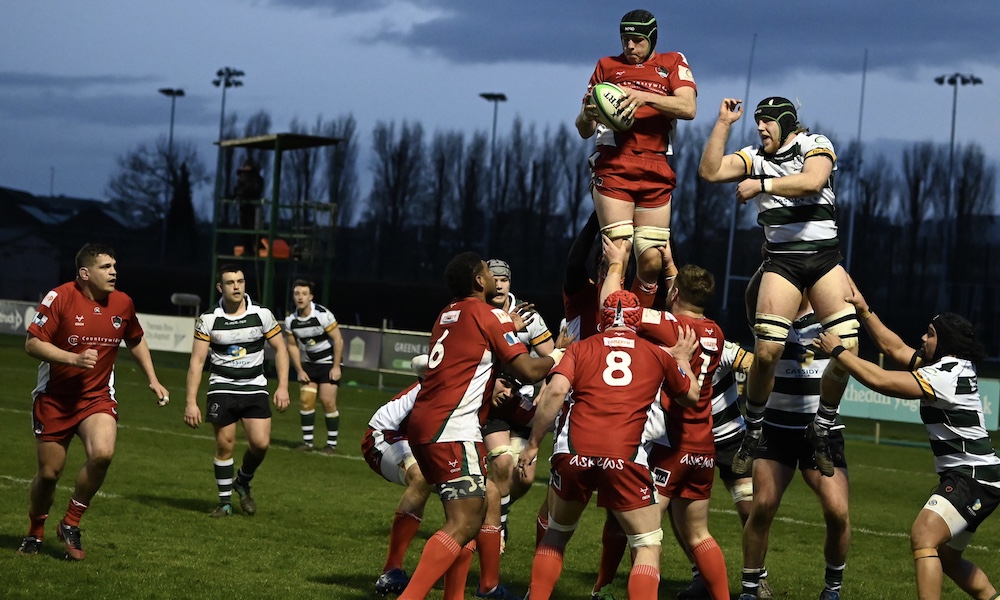 Jordon Poole marked his first start for Cov with a pair of tries as the blue and whites left Lady Bay with a rare win at the venue. But while the margin was an eventual comfortable 12 points the final minutes were anything but, as Nottingham pushed the visitors all the way with a second half fightback.

Poole bookended the first half with significant plays, a massive legal tackle on Carl Kirwan inside two minutes which saw the home back rower have to leave the field the first significant action, the try at the other end of the 40 minutes sending Cov into the sheds with a spring in their step.

Nottingham had the first chance of points, Matt Riddington kicking into acres of space for Harry Graham to chase. Rob Knox got back to cover, so much so that the home winger knocked on while diving onto the ball.

The danger was partially cleared from the scrum, but back came Nottingham to win a penalty and a five-metre lineout. The hosts went through a couple of phases before spinning it wide, but Tony Fenner was alive to the threat, snatching an interception which did not just de-fuse the pressure but also set the play in motion for Cov to score themselves.

Louis Brown and Rob Stevenson ran the ball out, and when Stevenson was tackled high Fenner kicked for touch. Another penalty followed soon after, and when the maul sucked in plenty of home defenders it opened space for Senitiki Nayalo to run it in from the 22-metre line, Fenner adding the conversion.

Cov were not able to convert their next lineouts in the home red zone into points, the throw just eluding the jumpers, with Nottingham also successfully resisting an attack from a scrum in a similar position.

The hosts were also belying their league position and results record to try to shift the attack to the wings as quickly as possible, whether through long passes or neat chips, and Cov’s defence had to be alert to the danger.

This also meant that while scoring opportunities were few and far between the action was entertaining, both teams backing their ability to play with tempo and accuracy.

It took until the half-hour mark for either side to have sight of the whitewash, Cov held up over the line from another powerful maul. But there was an advantage being played, and with that lineout also won Cov patiently went through the phases, Nayalo crashing over.

Fenner’s touchline conversion was a beauty, as was an Andy Forsyth interception which turned over a Nottingham attack just as the hosts were building up a head of steam, and a Phil Boulton counter-ruck which forced a fumble which became a penalty thanks to a bit of backchat.

Brown sent play from the 10-metre line deep into the 22, and when Jordan Coghlan was yellow carded for disrupting the first maul it was no surprise to see the ball go to the corner again, Poole coming up with the ball to mark his debut in the ideal manner.

Fenner continued his perfect record off the tee at the start of the second half, kicking a penalty from in front of the sticks to keep the score board ticking over.

Then in the blink of an eye Nottingham were back in the contest. Graham may have been denied in the first half, but there was no stopping him in the second, the winger going over for two tries in as many minutes.

The first was opportunism at its finest, Graham playing on when everyone else had stopped, anticipating the referee’s whistle for a fumble. But the second was all skill, Michael Stronge spotting space to send through a grubber from the base of a ruck and Graham showing neat footballing skills to keep the ball alive and cross.

Stung by this quickfire brace, back came Cov with a more powerful forward play which set up camp on the home line.

The first drive was pulled down illegally, and while the second was held up for a home scrum the pressure stayed on, and when Stronge made the mistake of taking the ball over his own line for a clearance kick Poole pounced for his second of the day.

This brought the bonus point, but Nottingham were not out of the contest, and the fourth quarter began with some serious pressure on the visitors’ line. The hosts were going through phases, but by preferring to shift the point of attack a few metres away from the breakdown they were stretching Cov’s defence well, Luke Frost the beneficiary.

Coghlan put Nottingham back on the front foot from the kick off, too, with a powerful break, the attack ended by an impeccably timed interception from Forsyth.

But Nottingham were not to be denied, and when Luke Mehson came off his wing to scythe through the Cov rearguard it set up the position from which Harri O’Connor went over for the bonus point try.

Alex Dolly’s conversion made it a five-point ball game with a couple of minutes to play and all of a sudden Nottingham had a sniff of a win.

Ryan Burrows had other ideas, and a barnstorming break up the left touchline not just left defenders in his wake but opened up the space for James Martin to mark his return to action with the try which sealed the win.