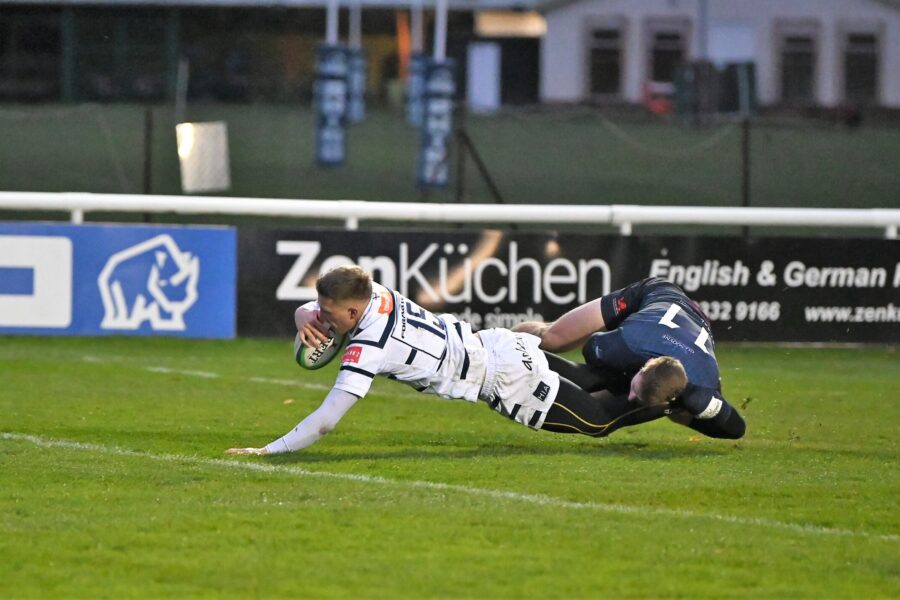 London Scottish bag their first win of the season leaving Coventry with another frustrating loss in Round 9 of the 2021/22 Championship.

The Richmond Athletic Ground has often provided Coventry with bad news having not won a league game there for over twenty years. Although Coventry was in high spirits off the back of their last win against Nottingham, the weather wasn’t going to make it easy for them! Swirling winds and bitterly cold temperatures caused multiple handling errors for both teams – something Director of Rugby Rowland Winter felt wasn’t capitalised on – especially in the first half. “There was a big wind behind us, we went in at half [time] 7-6 down and two, three, four opportunities within their 22 that we didn’t take” Winter explained. The wind working against Coventry in the second half, partnered with the underperformance from the first, meant that it was never going to be easy.

With both teams trying to get a handle on the tough conditions the game got off to a scrappy start, but opportunities came knocking early. Less than 5 minutes into the match, Coventry came right underneath the Londoners’ posts but were unable to pin the ball over the line. A penalty presented to Coventry was kicked to the corner rather than kicking for goal and a slight overthrow in the lineout resulted in London Scottish clearing their lines. Another penalty was presented to Coventry in the 16th minute – this time opting to kick, but being a slightly more ambitious kick than the previous opportunity, Evan Mitchell was unable to secure the points. The deadlock didn’t last much longer as the penalty count began to stack up for Scottish and gave Mitchell another opportunity to go for goal, this time slotting the penalty through the posts; Coventry put the first points on the board and was three points in the lead.

London Scottish flanker Brian Tuilangi was quick to retaliate and scored the first try of the game. Evading a couple of defensive tackles he dived over to score. Harry Sheppard converted the try resulting in a 7-3 lead to Scottish 29 minutes into the game. Although no try’s for Coventry in the first half, Mitchell managed to level the scoreboard to just one point with his second penalty and both sides left the pitch for half-time at 7-6.

To the delight of the travelling fans, it was Louis Brown who scored Coventry’s first try of the game just seven minutes into the re-start. A big carry from Will Owen was offloaded to Brown; whose quick pace was unmatched by the Londoners in his path, running the ball in diagonally to score. Saturday marked Brown’s first game of the season who is another face to return to the matchday 23 from injury. Tony Fenner now on the pitch, secured the points from the conversion placing Coventry 13 points in the lead.

From then on, the Scottish had found their stride and made the most of the opportunities presented, going on to score three tries in just over ten minutes. The first came from Tom Baldwin but no points from conversion, the Scott’s were now only one point behind (13-12). In the 60th minute, Ehize Ehizode gained the second of the half and Matas Jurevicius secured the third just five minutes later. Both were followed by successful conversions placing Scottish well in the lead with a score of 26-13.

A few replacements added some energy to Coventry’s game as Josh Barton went onto score just a minute later as he made a break along the right wing and closed the gap to 28-18.

Both sides showed no signs of stopping as the game edged closed to the final whistle, with the remainder of the points coming from a try each and a penalty to the hosts’. This unfolded with Scottish’s replacement Cameron King extending the lead in the 71st minute of the game with added extras from the conversion – followed by Rob Knox finding space in the corner, but ultimately it was too late as Scottish gained more points from a penalty, which was met by the final whistle – final score 36-23.

Still resolute in not using injuries as an excuse for the steam of frustrating performances, Winter concluded that “injuries haven’t lost the game for us today”, explaining “we had a team and a squad good enough to go out there and put a performance in that was better than the one we saw”. Coventry has the ability and has shown that throughout this season, with some adjustments the Blue-and-White still have the time to end the season on a high. Next week, Coventry play Bedford Blues at home on the 4th of December, where there will also be a Christmas Market. You can buy your tickets here.