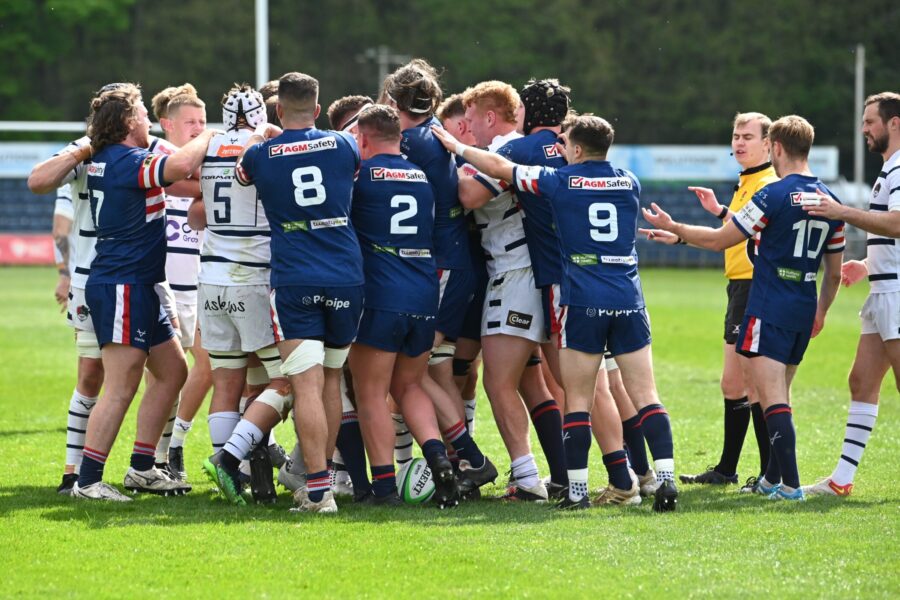 Coventry appeared on good form against a solid Doncaster team. The game opened with an instant Coventry penalty. Louis Brown’s kick gained us entry into the 22 and set us up for an instant attack but, instead, Doncaster claim the line out and found themselves with a penalty line out combination of their own.

Coventry responded instantly with an identical tale of events, reclaiming possession and then shifting along the breadth of the pitch. With both teams still contending dominance, the 600+ strong crowd would have to wait until the 11th minute of the game to see any scores.

Coventry kick to touch in the 7th minute, forcing Donny to defend in their 22. We knock on and go the phases but the ref calls play back for an advantage at our Coventry maul. The power of the pack proves prosperous and the Cov dogs hurl Jordon Poole over the whitewash. Tony Fenner shows his veteran moves and slots the conversion for the full points.

A strong tackle from Doncaster at the restart had Coventry pinned in their 22 and forced Cov to use a kick to exit, the ref ruled the ball was out so Ryan Burrows darts to snatch the ball from the hands of Joe Green, who was about to chip kick from the back of the ruck.

Some big defensive hits on halfway restrained Cov from gaining any territory easily, but the game was halted and Doncaster would suffer another blow when ex-Cov Gareth Denman was forced to leave the field due to HIA protocols with a nasty cut to the head.

At the following scrum, Doncaster are penalised for coming in at the side and Fenner gets a shot at three points off the tee but, unfortunately, it sails wide.

Coventry would double their lead next, however, following a lineout just outside the Doncaster 22. Coventry play the phases and break a couple of tackles to make it up to the 5m line resulting in Fred Betteridge crashing over on the opposite side. Fenner adds the extras, 0-14.

Coventry does their best to hold off a resilient Doncaster pack for another 15 minutes – but following on from a Donny lineout on halfway and their scrum on the edge of the Coventry 22, a close-range pass to Maliq Holden had him in at the wing for an unconverted score, 5-14 in the 36th minute.

Coventry retaliates with just four minutes on the clock and close out the first half with another try. Louis Brown evades a tackle and makes up a decent distance from halfway. He sends his final pass to Andy Forsyth who confidently walks the ball over the Doncaster line. Fenner converts the score. HT 5-21.

Not even a full minute into the second half and the medical team are called on to assess Exeter Chiefs loan, Matt Johnson, following a big collision and a knock to his head. Senior Academy Jake Bridges is called on to replace and play resumes.

In the 49th minute after enduring some kick tennis, the ball bounces out of the hands of Will Owen inside our 22 and the ball is pounced on and repossessed by Sam Olver. He chips to Holden who runs it home for his second. Olver converts the score, 12-21.

Replacements replenish Coventry’s energy stores and Rhys Thomas, Rob Stevenson and Tom Emery are all on-field by the 57th minute. A penalty at the scrum just 3 minutes later allowed Olver to kick for points and after slotting it successfully, they close the gap to 15-21.

5 minutes later, Coventry wins a penalty of their own from a high tackle and Fenner kicks for the corner. The Knights defend the maul so we resort to phases. After a few attempts to crack the line, James Tyas crashes over and Fenner slots the conversion, 15-28.

This is followed by the replacements of Fin Ogden, Luc Jeannot, Tom Ball and Suva Ma’asi who make their way onto the pitch for the closing quarter.

Less than 10 minutes on the clock and Doncaster get another to get back in the game and close the gap to just 6 points – scored and converted by Sam Graham, 22-28.

Both teams battle it out for the remaining eight minutes, but we close out the final half in the same fashion as the first and Tom Emery runs the length of the half with a Donny man not far behind him. He makes the line before he is tackled and in the 80th minute, Fenner slots the conversion to nail a 22-35 victory in the first leg of the quarter-final tie.

We welcome Doncaster to Butts Park Arena on Sunday the 8th of May, kick-off at 3 pm for the second leg. To celebrate the win, we’ve extended our ‘tickets for a tenner’ deal up until 8/05/22 to encourage as many Cov fans to come to cheer the boys over and see who makes it through to the semi-finals. Don’t miss the last home game of the season, buy your tickets here.

Hear Alex Rae’s comments on the match below.