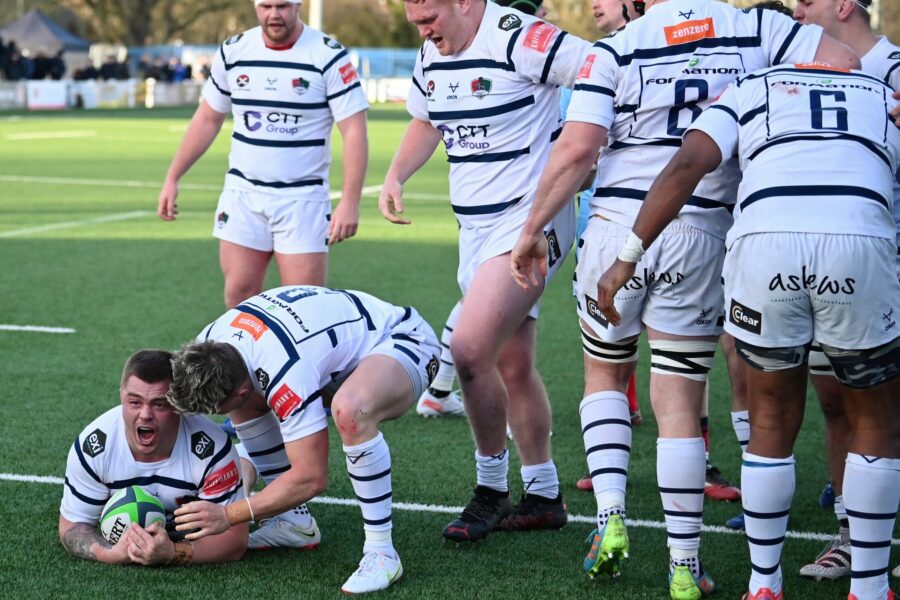 Best performance of the season? Coventry deliver a strong 80 minute display, scoring nine tries in Round 20.

Blue skies and the sun shining, it was a perfect day for some Championship rugby at Butts Park Arena on Saturday. London Scottish’s only win this season was from Coventry’s clash with the London side in Round 9, which left plenty for Coventry to answer for on home turf.

Scottish made two last-minute changes before the whistle to replace Levi Davis at 14 by Sam Baker and Morgan Dawes coming it to replace Baker’s spot on the bench at 23.

Both teams run out on the pitch and lined up for Executive Chairman, Jon Sharp to present Tony Fenner with a framed shirt to commemorate his 100th appearance. This was followed by a minutes applause for Evesham player Jack Jeffrey who recently lost his life doing the thing he love the most, playing rugby.

From the whistle, Coventry applied pressure and didn’t have to wait long for it to pay off. The visitors were penalised at the ruck ten minutes into the game, allowing Tony Fenner to kick for points. Handled expertly on his 100th appearance, the ball slotted through the posts and placed Coventry three points in the lead.

Another very kickable penalty came just five minutes later, but Coventry opted for the corner instead. On the 23rd minute, ex-Coventry player David Halaifonua got caught on the wrong side of the rule bookone too many times and was sent to the sin bin. Coventry wasted no time making the most of their advantage and Senitiki Nayalo bundled over the try line just two minutes later after a quick tap-and-go. Fenner added the extras to make it 10-0.

Off the bounce, Cov sprung into action and Josh Barton sniped around the fringes of the ruck going onto score with his hand in the air from 60m out. Fenner added two points with his conversion placing Cov ahead by 17 points nearing the half-hour mark.

The London side made some good inroads in the following play but the threat was handled expertly by the defence with an impressive kick to clear.

Barton then mastered the same move around the ruck making it very close to the line. Scottish scramble defence held the pack off momentarily but powered through with Adam Peters making it over the line. One wasn’t enough for Peters who followed up with another try to secured the bonus point just at the stroke of half-time. Half-time score 29-0.

Alex Rae acknowledged post-match that “we have had a few games where we have been good for 40 minutes and then messed it up in the second half” which had the Coventry faithful pinned to their seats for the forthcoming action.

Fenner got the second half underway and although an early scrum penaltyallowed the visitors to build a strong attack, a lovely intercept saw Coventry claim the first try of the second half as well. Making it very close to the left corner, the Scottish defence forced Coventry to shift the ball wide. The ball spiralled down the line promptly, finding Rob Stevenson who beat two Exiles to the line in the far corner. Fenner did well to find the posts against the harsh sunlight that was now settling over Butts Park, making 36 points to nothing 47 minutes into the game.

The replacement of Brian Tuilagi proved to be the missing link for London Scottish that day, immediately making an impact off the bench. In his first touch of the game, Tuilagi broke from the ruck and made it 50m before offloading to Dan Nutton just in front of the line to score. Harry Sheppard slotted the conversion for the seven points.

Now just 20 minutes on the clock, Coventry kicked to the corner after being awarded a penalty for the visitors blocking. Jordon Poole rolled off the resulting maul and crashed over the line.

Although the Scottish were awarded a free-kick and looked threatening, Coventry’s defence worked perfectly and turned the ball over. Shifting to attack straight away, Coventry almost had an end-to-end score had it not been for Dan Nutton’s intercept. Failing to hold the ball, the ref cited a deliberate knock-on and he was the second Exile to face the sin-bin that day. With an extra man on the field, Coventry played wide and Stevenson scored another in the corner.

The visitor’s final try came from another free-kick at the scrum just outside the 22 going on to move steadily towards the line. A gap in the defensive wall was spotted superbly by Leo Fielding who put Sam Baker in at the corner. The conversion was missed which totalled their score to 12 points.

Cov went on to score two more in quick succession in the final minutes of the game. The first in the 76th minute from Will Owen after playing from a scrum in the visitor’s 22. The game finished with an 80-yard effort from the boys that culminated in skipper Ryan Burrow crashing over for glory. Tom Curtis added the extras to each try making the full-time score 62-12.