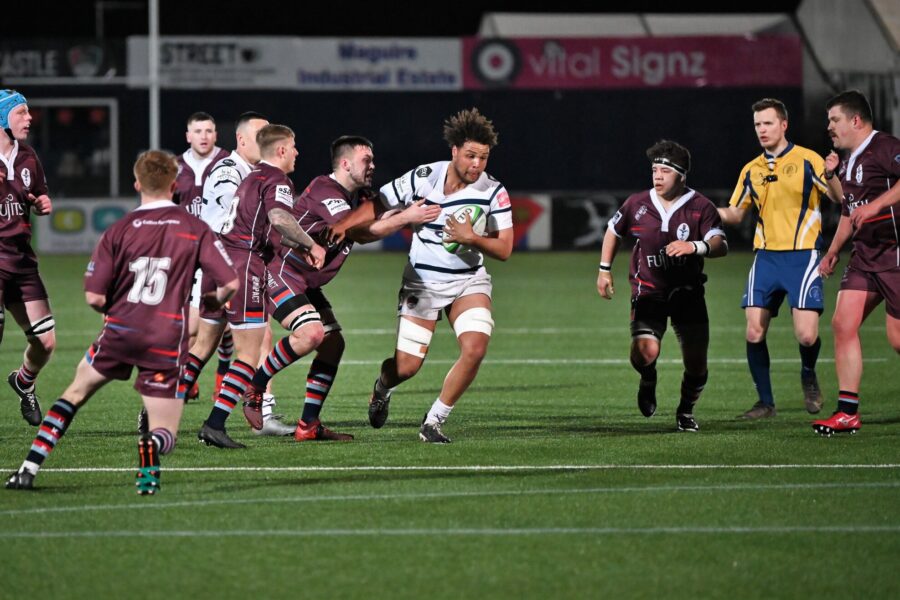 The young pups of Coventry Rugby U23s took to the field yesterday evening for a #NextGen fixture against UK Armed Forces (UKAF). The increased playing opportunities from these fixtures seemed to have paid off, as Cov appeared more organised in their attackfrom the outset in contrast to their oppoisition. An exciting game ensued – in which UKAF came back fighting in the second, resulting in a narrowly edged victory for Cov’s U23s under the Friday night lights of Butts Park Arena.

With the game having just got underway, it was UKAF who smelt the first whiff of a try less than ten minutes into the clash. A penalty at the scrum placed the visitors just 8m from glory. The ball was received well from the lineout and the team moved with haste to make the distance – but crushingly for the UKAF, they were held up and recalled for a penalty advantage. Some genius defence at the subsequent scrum allowed Cov to clear their lines and keep a clean sheet in the first half.

Cov then kicked up a gear – going on a four-try rampage before the half-time whistle. The first of the four came from the hands of David Opoku (CMA) – also with a pair of brilliant feet, who unleashed from the right-wing to Sam Peppitt (CMA) on the inside to score.

With the pressure building nicely in a series of phases, the second followed from a line out 10m from the line. The forwards got a penalty advantage on the right which saw the backs spin the ball to the left to find Former Northampton Old Scouts boy, James Brazier (CMA) to dive over.

Now at the half hour mark and 10-0 reflecting in the scoreboard, the pack made good inroads on the back of a lineout 40m out and some strong carries up the middle. With the pressure mounting once again, Cov tap and go 5m from the line to land Peppitt (CMA) back in his favouite corner and for his second of the evening, 15-0.

A matter of minutes later, UKAF are done for crossing and the Blue-and-White’s find themselves in the opposite 22. Brazier unleashed an inventive kick overhead which he collected and dived over the line. That wrapped up the first half with only a few minutes on the clock, and the boys headed to the changing room with a score of 20-0 under their belts.

The UKAF start the second half the stronger team of the two sides. 43 minutes in to the game, the visitors win a lineout 25m from the line. After real forward effort, the squad reap the reward from a carefully built driving maul which lands them in the far corner. It wasn’t a good night for the kickers as the extras were missed on their side too, 20-5.

UKAF’s defence then proved to be a challenge for Cov after a kick into the 22 from a pen look to have secured the boys a nice attack. The visitors defence held strong and went onto regain possesion landing themselves in our own 22 once more. After a series of phases, the UKAF paitence paid off as they gained their second try of the evening in the 56th minute which secured themselves well and tryly back in the fight, 20-12.

Good Cov pressure in attack met a strong UKAF defence once again; which saw a penalty to the away side to get out of their own half. Tragedy struck again as Zac Byers (CMA) was shown a yellow which left Coventry down to 14 men against a determined Armed Forces.

UKAF made the most of their extra man on field, as James Turner goes over after a brilliant run from deep for a converted score – narrowly closing the gap to just one point, 20-19.

With only ten minutes left on the clock, not a fingernail was left in tact among the 841 faithful who braved the cold to watch from the stands. Relief came in the form of a penalty which landed Cov just 5m out. The ball was recieved well and a driving maul unravelled; sending Will Eccleston over the line for what would be the final try of the game in the 73rd minute, FT 25-19.

The remaining minutes saw the UKAF recieve a yellow of their own, but Coventry couldn’t capitalise on the opportunity regardless of 15 men back on field. The final minutes of the game saw a UKAF lineout in their own 22 but the clock ran out before any real chances materialised.

Well done to all the young players from both teams who put on a great show for those in attendance. The #NextGen fixutures are a great exhibition of the talent in Coventry’s pathway programmes and an illuminating light into the possible future of Coventry Rugby’s line up.

The season is now wrapped up for a large percentage of the player on the field from the Coventry Moulton Academy, who had an unbeatable season and have earned a good summers rest for the return of many faces this years cohort in September.

The first team get back into the swing of things next, as the Championship Cup gets underway against their Cup draw and challenging rivals – Ampthill. First, we play away on the 9/4/22 and return to Butts Park Arena on the 23/04/22 to see what team progresses futher. Support the boys and buy your tickets here.

Coventry Rugby U23 vs UK Armed Forces U23