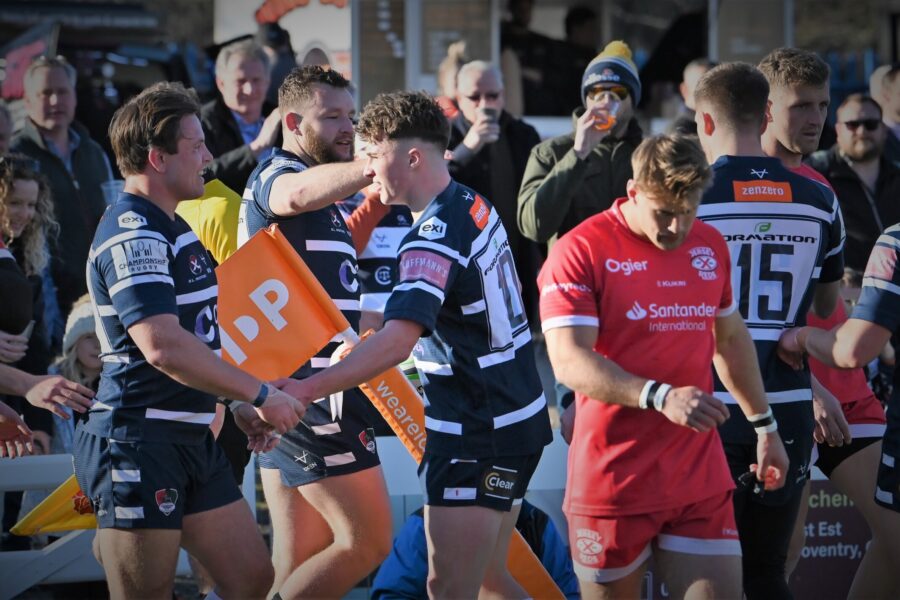 It was always set to be a tough challenge on Saturday afternoon against Jersey Reds who sat fourth in the League prior to kick off. Coventry’s team was lacking of usual Premiership talents due to the recall of most dual-reg and loanee players who have been competing for Championship clubs of late. The knock-on of this meant that a number of fresh faces were introduced to the Coventry squad this week.

On a day that marked the final home Championship game of this 2021/22 campaign also bore an extra layer of significance, as Ryan Burrows was to take to the Butts Park turf for the final time in a league capacity. Having served the club valiantly over the last 3 or so years, the objective of the squad if nothing else was to make their ‘lead from the front’ skipper proud – something which they undoubtedly achieved.

Last-minute changes caused some extra disarray with Toby Trinder unable to take to the field, resulting in Luc Jeannot converting to a starting position and Max Lockwood being welcomed to the bench and to the club.

Things began just as the visitors would have liked with an early try off the back of an early scrum in the 4th minute of the match, with Holgate the try scorer. A successful conversion from Sam Leeming to follow meant that Coventry were on the back foot from the off. However, the spirit of this young Coventry side was on show for all 2’000+ to see as they responded with two quick scores in the shape of Senitiki Nayolo and Rob Knox – both converted by Fly Half Evan Mitchell leaving the scoreline at 14-7.

Jersey pressure at line out time started to tell in the 20th minute as a driving maul resulted in a try for the visiting side as Clarke went over for the Reds. However it was a tale of ‘whatever you can do…’ as Suva Ma’asi was the beneficiary of Cov’s own mauling prowess soon after, leaving the scores close at 19-12.

With both teams going tit-for-tat; the game followed its emerging score-for-score pattern and Jersey made gradual progress up the pitch for Simmons to score meaning things were tied up at 19-19. With half time drawing closer it looked like both teams were due to go in to the changing rooms level, however, and perhaps where the game was lost; Jersey had other plans for the final 5 minutes of the first period.

Back to back scores from another rolling maul (Clarke) and some clever opportunistic play (Simmons) on the stroke of the half meant that all of a sudden Jersey had a 14 point advantage at the break going in with the scoreline 19-33.

Unfortunately, the start to the second period of the match was a mirror of the first, with a try for the visitors in the 4th minute – this time Barnes going over after a good showing of patience in attack within the 22 before shifting the ball to width in order to capitalise on their growing pressure. 19-40

Just before the 50th minute mark, Cov finally announced their response to a series of Jersey scores, with James Tyas carrying hard to score after being the quicker side to shift away from a failed driving maul. Mitchell added the extras and there was a sniff of a dramatic comeback in the air.

Jersey quickly crushed any hopes of a happy ending for the Coventry side with tries either side of the hour. First it was Sam Leeming who converted his own score after a neat break through the midfield, before TJ Harris used his brute strength to barrel his way to the line. 26-54

At this point Coventry were sadly well and truly beaten, however true to the Cov Dog spirit they refused to lie down as Will Owen added his name to growing list of try scorers in this match after Burrows was initially held up. With 10 minutes to go however, and off the back of some loose kicking from both sides, it was Jersey that capitalised to score through Simmons once more leaving the scoreline looking ever impossible to salvage at 33-59.

Staying true to the free flowing nature of the match, both teams found both time and opportunity to score in the final 10 minutes. First it was Coventry who went over through James Martin who impressively ran it in from distance before replacement scrum half for Jersey, Mitchell, scored for the visiting team to make sure they had the final word at the end of what was an extremely dominant performance.

Match sponsors Man of the Match as selected by CTT was captain Ryan Burrows who once again put his body on the line for the team around him, but this was Jersey’s day, who showed why they have been such a difficult force to contain this season.