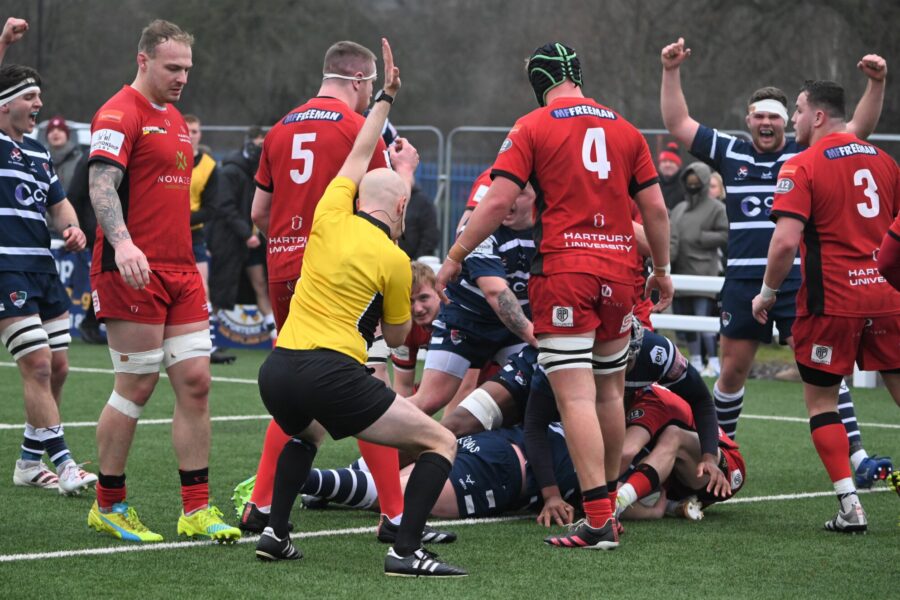 A seesaw competition sees Coventry snatch the victory in the final second.

Director of Rugby Rowland Winter described Saturday’s game as a “nailbiter”. Coventry had a dominant first start but a number of injuries seemed to disrupt Cov’s momentum in the second. Winter recognised that the team lost their groove commenting “we were strong, we were dominant and we didn’t want half-time to come, but second half we got a bit wobbly,”Winter said. “Hartpury hit us with three tries and really turned the game and I think we were lucky to hold on and get that win in the end.”

The game opened with both teams fighting for dominance. The penalty count went mostly in Coventry’s favour in the opening ten minutes which culminated with Cov’s first try in the 12th minute. Club Captain Ryan Burrows was the first man over the line after Hartpury were penalised deep in their own half. The ball was kicked to touch and a driven lineout took the boys further. Tony Fenner handled the conversion with ease for the extra two points.

Less than ten minutes later, Burrows looked to have another but found himself just short of the base. This was followed up by Jonathan Kpoku who pinned the ball over for the second try of the afternoon. Fenner added the extras to make it 14-0. Not long after, Kpoku’s game was cut short after the second row went down from a suspected leg injury. Unable to continue, Kpoku was replaced by Nile Dacres.

Two or three close encounters ensued before Hartpury responded. The highlight of the three was Leicester Tigers loanee Sam Aspland-Robinson’s charge down the left-wing. Aspland-Robinson passed the ball right 10 meters out but a misjudged grubber kick shut down the remarkable play.

Hartpury’s response came in the form of their prop Ciaran Knight with around 5 minutes left of the first half. However, the remaining time proved plenty for Coventry to play with. Another penalty was awarded to Coventry and Fenner opted to kick securing another 3 points ahead of the visitors.

Having been on the field for just ten minutes after replacing Joe Snow, Josh Barton found the time to squeeze in one more just before the break. After another storming Cov run, it was Barton who ran the ball home resulting in a halftime score of 24-7.

Hartpury came out firing in the second half, transforming 12 points into 24 in the space of five minutes. Ethan Hunt at the bottom of a line-out drive to get the Gloucestershire side started. Rob Smith then flew over in the corner after Coventry lost possession in their 22. Toby Venner closed the gap after James Williams collected his own kick and found Venner to go over. A successful conversion from James Williams’ edged the lead for the visitors for the first time that afternoon.

With the noise getting louder from the stands, Coventry was swift to respond. Relief came in the 57th minute of the game after Tom Curtis earned the squad an attacking lineout deep into Hartpurys 22. Josh Bainbridge – in his first game back from injury, found the try line after rolling off the back of a driving maul. Fenner converted the score to make it 31-26, but with just over 20 minutes to go, the fate of the game was uncertain.

Nearing the 80-minute mark and without having conceded another, Cov looked good for the win if they could hold on for a little while longer. Disaster struck in the 78th minute when Venner made a break from a halfway scrum. With remarkable pace, the scrum-half found the gaps and ran the ball home. The successful conversion made their score 31-33 and with two points in the lead and just a minute to go, the visitors looked odds on for the win.

In a remarkable turn of events, Coventry won a penalty soon after the re-start. Fenner handled the kick expertly and as the ball glided through the posts, the final whistle blew. Fenner had won Coventry’s sixth Championship game this season.

Coventry return to Butts Park Arena on the 29th January 2022. You can buy your tickets here.