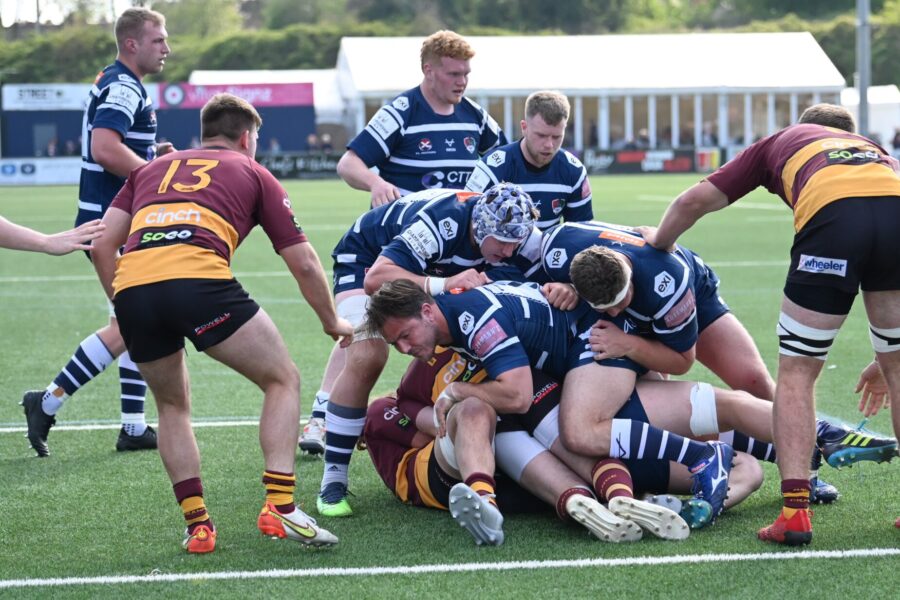 Having scored 21 points to 27 in the first leg at Dillingham Park,Coventry went into the second leg of theChampionship Cupyesterday against Ampthill with a six-point deficit to chase.

The game was a narrowly-edged victory; but ultimately, the Cov dog roared once again to come up trumps 31-22 on home turf – an aggregate score of 52-49. As a result Coventry head into the quarter-finals against challenging opposition, Doncaster Knights.

Ampthill got things underway at Butts Park Arena and was quick to get Coventry on the back foot. Ampthill scored the first two opening tries in quick succession in the 2nd and 6th minute of the competition.

The first came from Ben Cambriani who intercepted a loose Coventry pass and went the distance for an unconverted score. Four minutes later, the A’s capitalise on their kick into the corner and after a few phases, Theo Dan crosses the whitewash after a massive driving maul pushed him across the line.

Now 14 points down and the deficit in the back of the players’ minds, Coventry needed the next one. A Cov lineout on the opposite 5m set the team up for a nice attack. The ball was collected well but the power of the maul quickly expired and forced Cov to pass wide. A few phases later, the Blue-and-White’s patience in the 22 paid off and in the 16th minute, Rhys Thomas – on his first game back from injury, pins the ball over the line. Evan Mitchell slotted the conversion to make it 7-12.

A thrilling spectacle followed 31 minutes into the game when an Ampthill lineout was overthrown and repossessed by Coventry. On his first run as Captain, skipper Jordon Poole breaks away from the defence from deep in our own half and went the length of the pitch. Poole offloads but the Mob caught up at this point and slowed the ball down in the 22. Young Fred Betteridge then collects from the ruck and finds the line with extras added by Mitchell to take the lead, 14-12.

In the 34th minute, Ampthill’s Paddy Ryan was then shown a red card for a head-on-head collision involving front-rower Matt Johnson.

Playing with a man down, but with only minutes left of the first half – Coventry remained determined and their eyes fixed on the try line. The closest Cov came was in the final few minutes after a small medical break for an Ampthill player. The game resumed with a scrum just shy of the visitors 5m. We make the line but the ref calls us back after Ampthill’s Theo Dan was sent off to the sin bin for persistent penalty infringements. Senitki Nayalo taps and go’s 5m out but comes up just short. We’re pinged at the following attempt meaning Coventry was unable to capitalise on the opportunity and achieve any more points that first half. HT 14 – 12.

A big push was needed for Coventry in the second half and many hoped that Ampthill starting with 13 men could open up the game for the Blue-and-White’s.

This hope was bolstered by fresh replacements in the form of Ryan Burrows, Josh Bainbridge, Louis James and Will Owen – all on the field by the 45th minute.

Ten minutes later, it was in fact Ampthill who got the next opportunity for points after Cov conceded a penalty and Ampthill opt for the tee. Thankfully, the winds had picked up at Butts Park by this point and the kick sailed wide.

Less than a quarter of the match remaining and Cov yet to make the mark they intended to in the second half, Ampthill takes the lead after securing a lineout on halfway and sending the ball to Theo Dan who broke off the maul offloading to Tom Bacon to score. 14-17.

A matter of minutes later, Suva Ma’asi restores the lead from the maul after Louis Brown kicked for the corner. Tony Fenner – who recently announced this would be his last season playing professional rugby, demonstrated his veteran moves and nailed the conversion to make it 21-17.

With just 10 minutes left and two points in the way of taking the aggregate lead in the tie, Fenner makes a break for it offloading to Josh Bainbridge who ran one finger in the air and flipped over the line to mark the lead in style. Fenner converts to make it 28-17.

Crushingly, Cambriani scored his second try of the afternoon with four minutes remaining and the tie was then all square – 28-22 (49-49).

A minute later we make it back up into the 22 and in true Fenner fashion, Tony Fenner wins the game for Coventry off the back of a penalty. Our old rivals got particularly close when a Cov lineout occurred on our 5m line – but it was executed perfectly and the ball eventually got booted off to the sound of the whistle! FT 31-22 (52-49).

Hear what Alex Rae had to say post-match below…

Moving forward into the quarter-finals of the Champ Cup, we anticipate that we will pay Doncaster away on the 30th of April and return to Butts Park for the second leg on the 8th of May. (Dates and times TBC).