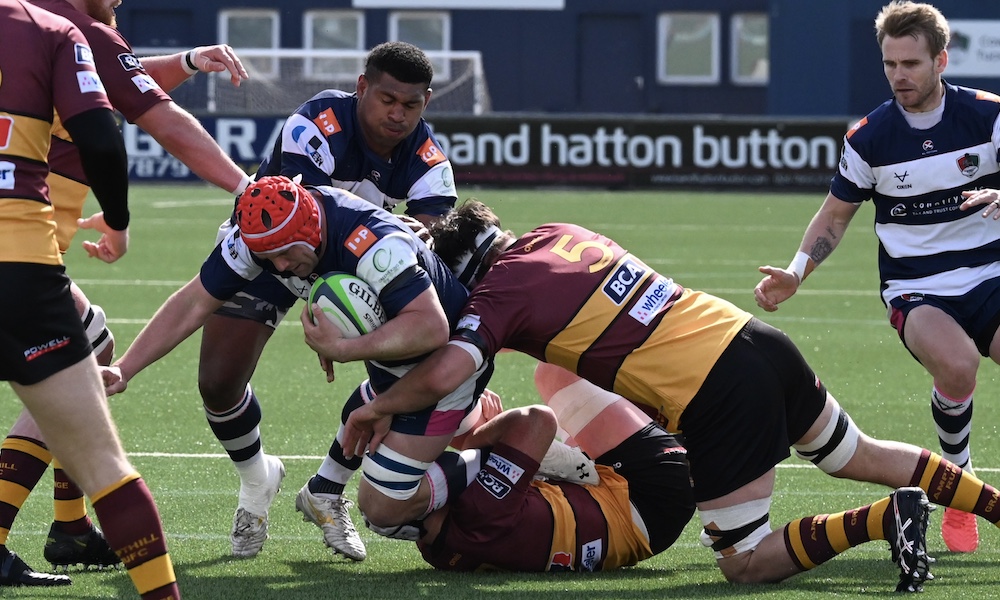 Coventry made it back-to-back wins, following up the victory at Nottingham two weeks ago with a 26-15 win over Ampthill at Butts Park Arena on Sunday. First half tries from forwards Adam Peters and Cameron Jordan were backed up by a second half effort from Sentiki Nayolo and Josh Barton’s sensational all-important bonus-point score, which combined were enough to see off the visitors in what was a scrappy, but tight affair.

Coventry came flying out of the blocks. After trading a few penalties and Ampthill sacking a Coventry maul, the hosts made the most of Tony Fenner’s superb show and go and 50-metre. The ball was recycled and Jordon Poole found Peters with a clever offload, who went over in the corner. The tight angle proving too much for Fenner to add the extras.

An unclaimed restart allowed Ampthill to regather possession and Louis Grimoldby kicked the visitors deeper into Coventry territory after the home team failed to roll away at the breakdown. The period of pressure was rewarded by a Grimoldby penalty, but while Ampthill kept their foot on the pedal, making good ground from the restart, it was Coventry who struck next.

Once the home team got into the opposition half, one too many consecutive penalties saw hooker Dave Ward sent to the sin bin for 10 minutes and Coventry took advantage immediately after a quick tap penalty saw Cameron Jordan dot down under the posts. Fenner converted to make the score 12-3 to the Blue and Whites’.

These would be Cov’s last points of the half after Ampthill spent the majority of the last 10 minutes camped in Coventry’s 22. After Jordan tried to pinch a few too many yards after being brought down, the visitors put the ball into touch about five metres out and after Nayolo held the ball up in illegal fashion he too, was shown a yellow card. From here Ampthill opted to scrum repeatedly, where they really began to dominate and after a string of penalties, captain Ryan Burrows became Coventry’s second loss to the sin bin.

Ampthill made the most of the extra man (which became two when Ward returned) and eventually went over with Alex Humfrey dotting down from close range. Grimoldby added the extras as the sides went in at the break separated by just a couple of points at 12-10.

Coventry enjoyed some early possession and had some nice passages of play at the start of the second. This would do little to thwart the visitors though, as a neat cross-field kick from Grimoldby was gathered well by centre Jeremy To’a for an unconverted score to put the visitors in front for the first time.

Coventry then began moving through the gears and eventually found their mojo. A quick tap penalty from Joe Snow forced an Ampthill tackle before retreating 10 metres. This then allowed Fenner to put boot to ball and give Cov a lineout in a great attacking position. Replacement hooker Tom Doughty made no mistake with his throw and the home side got their maul rolling, getting within a few yards of the line before Nayolo peeled off for Coventry’s first points of the half. Fenner coolly added the extras to put the Blue and Whites back in the ascendency.

Cov may have been in front by Ampthill were still in the contest. But the visitors were not able to break down what was an increasingly aggressive home defensive line, one shot from Burrows in particular which both eased pressure and resulted in a fantastic coast to coast try.

Louis Brown gathered the fumbled ball and identified the space and more importantly the overlap that Coventry had on the far side of the pitch. Well timed passes and offloads saw the back-line race up the pitch and Will Butt found support on his inside via replacement scrum-half Barton, who finished off a brilliant score that both crucially ensured the try bonus-point and took the lead into double figures, which is how it stayed until the final whistle.

At times this was a scrappy game, but late on there were some moments of pure brilliance, Barton’s try the standout example. Despite having only 13 men for a period at the end of the first half Cov conceded just the one try, and there will be plenty of build on when the team heads to Hartpury after the bye round next week.