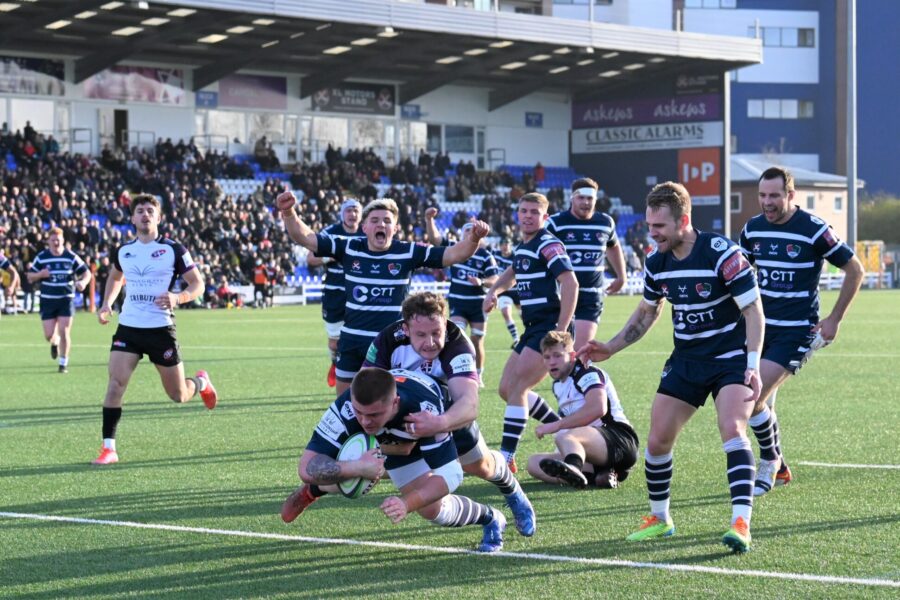 A tale of two halves sees Cornish Pirates sail away with the victory.

It was Coventry’s second 2021/22 Championship league encounter against the Cornish Pirates on Saturday, which saw the Blue-and-White’s achieve improved performance on home ground in comparison to the low scoring result on Cornish turf last October.

Director of Rugby Rowland Winter was “gutted” to have commanded the game in the first half against title contenders to not carry the leading performance into the second.

Both teams ran out to dry and blustery conditions at Butts Park Arena with the visitors kicking the ball into action. Coventry was found on the wrong side of the ref’s whistle soon after, which supplied the Pirates an early chance to get ahead. Arwel Robson opted to kick and won his side their first three points of the game.

Coventry responded with haste and went on to score back-to-back try’s. The first came from a quick tap penalty in the 9th minute which allowed scrum-half, Josh Barton, to dart over the line. Tony Fenner added the extras for the 7 points. Just a minute later, Cov immediately regained possession and stormed downfield. Sale Shark loanee Tom Curtis almost made it the full distance but it was hooker Jordon Poole – who is on loan from Exeter Chiefs, who crossed the line for an unconverted score.

From then on, a ping-pong of penalties from both parties transpired. A penalty was awarded to the Pirates in the 18th minute and the visitors looked dangerous just ten meters out. Tom Channon’s throw-in was well received by the Pirates and driven hard by his pack. Channon rolled from the driving maul and was the first over the line for his team that afternoon. The winds proved challenging for Robson too, as he was unable to convert the try, but redeemed himself just three minutes later when a penalty kick materialised. Robson found his feet and slotted the ball through the posts to close the gap just shy of just one point, 12-11.

Fueled by the fight-back, young Fred Betteridge made some good distance after a few phases and made his way into Pirate territory. The game was halted as the referee quickly identified that a player from the opposition required some attention. Unfortunately, Callum Patterson left the field on a stretcher, to which we wish him a speedy recovery.

The game resumed with a Coventry scrum in the visitors 22 and a Coventry penalty materialised soon after. Fenner opted to kick and successfully extended the lead to 15-11.

Looking to make the most out of opportunities presented, Rob Knox intercepted the following Pirates ball and kicked to their half. Four or five phases later, the Pirates were penalised for not rolling away, providing another chance for Cov to kick for points. Fenner was good for another reflecting on the scoreboard 18-11.

Now in the closing minutes of the first half, it was Coventry that looked dangerous from an attacking lineout in the visitors 22. Ill discipline provided Cov with another chance off the tee. Fenner, now three for three wrapped up the final half with his kick. HT 21-11.

Coventry “looked the better side at halftime and deserved the lead” Winter commented. Against all odds, they entertained fans as the underdogs but, unfortunately, were unable to build on their momentum in the second.

Winter felt that the “game swung massively” from the restart. Where the penalties were fairly even in the first half, the majority of decisions seemed to go against Coventry thereafter. Although some decisions seemed dubious to bias eyes, giving away penalties defensively gave Pirates multiple opportunities to enter the oppositional 22, the opportunity to up their tempo and place Coventry under pressure.

The first points of the second half came after an attacking lineout nearing the hour mark. The increased pressure that Pirates were applying led to Coventry giving away a penalty right in front of the posts. Robson slotted the ball with ease to make it 21-14.

A minute later, another penalty goes Pirates way and they spring straight into action from an attacking lineout 22 meters out. They make it right in front of the line and Matt Bowell goes over for their second try of the afternoon. The points were converted by Robson to tie the teams level 21-21.

Coventry displayed some good fight and exhibited some good play, but ultimately didn’t match the pressure applied by the opposition. Entering the final ten minutes of the game, their replacement number 8 Tom Duncan socred the Pirates third try in the 72nd minute off the back of an attacking lineout. Although the conversion was unsuccessful, it was enough to place Coventry in the deficit for the first time since near the start of the game: 21-26.

Coventry, now a player down having lost replacement prop Luc Jeannot to the sin bin weren’t able to fight Pirates ambition. A familiar face, Olly Adkins, who had actually played for us as injury cover in November against London Scottish and is now on loan to the Pirates from Gloucester, delivered the final nail in the coffin for their bonus point scoring try in the final minute. The unsuccessful conversion was shortly followed by the whilst and wrapped up the score to be an ironic ten-point lead. FT: 21-31.

Coventry goes without a fixture next weekend and returns on 11/02 to play Nottingham Rugby away. The following Wednesday the team return to Butts Park Arena to play the RAF in a friendly under some Wednesday night lights (23/02 KO 19:45) you can purchase your tickets here.