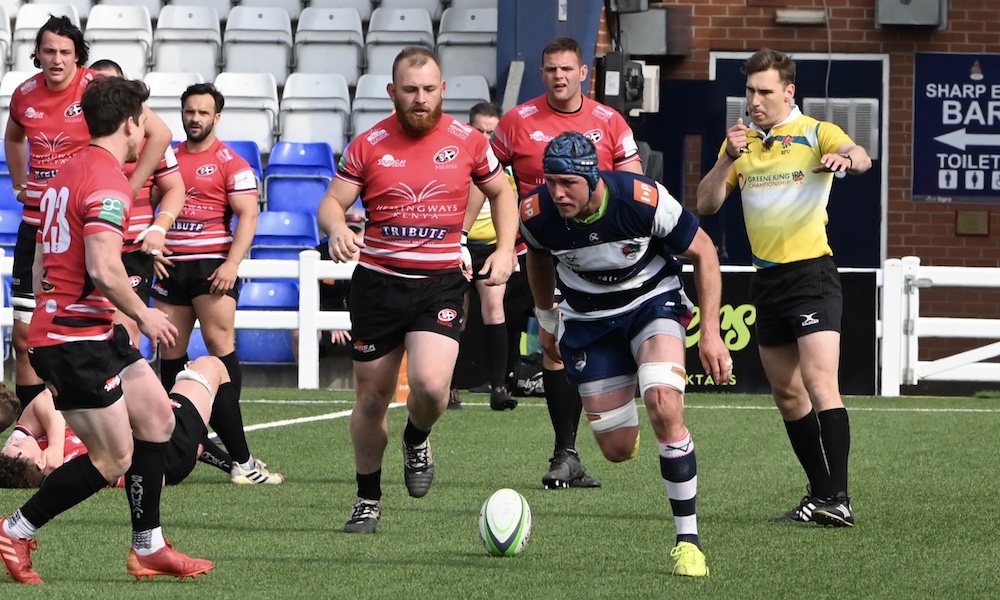 Despite three tries from Coventry, the home team’s efforts were in vain as they slipped to their first defeat in four games, losing 19-30 to Cornish Pirates at Butts Park Arena

As the table would suggest the two teams were evenly matched, evidenced in a closely fought first half, where both teams had plenty of chances, but failed to make the most of them.

The Pirates got off to the better start and quickly found themselves with possession in the Coventry half after a string of early penalties. Initially opting to go for the corner, the blue and white defence was holding strong, but another penalty, in a much more kickable area, saw Pirates fly-half Arwel Robson slot the first points of the afternoon, giving the visitors a 0-3 lead early on.

It was a deserved lead, but it was not long before the hosts hit the front. Some brilliant build up play started with Louis Brown floating a ball to captain Ryan Burrows, who made a trademark barrelling run deep into Pirates territory. From here, another perfectly weighted pass from Tony Fenner found Will Butt in his stride. After fixing his defender, the wing found support in the form of young prop James Harper, who went over in the corner. Fenner added the extras to put the team 7-3 up.

It was a well-created score from Cov, but the Pirates were hitting their own good running lines, too, Rory Parata arcing through the home defence to race through and dot down between the posts. Robson slotting the conversion to give Pirates a three-point lead.

Not long after, the Pirates were on the hunt again. A break from Robson with support on either side of him made a second try look likely, but fortunately for Cov, the fly half’s offload attempt went awry and the visitors had to settle for another three points.

Cov did have their opportunities, but – in moments which would be symptomatic of the match as a whole – Tom Doughty fumbled a Luc Jeannot offload with plenty of space in which to roam, and Burrows had a try ruled out for an incorrect restart.

This came with Antonio Kiri Kiri off the field for killing the ball close to his own line, but Pirates held out and the teams headed in with Coventry six points adrift.

The Pirates took little time in opening their second half tally with Robson adding another three points from distance after Coventry had been found guilty of not rolling away following the tackle.

This echoing of the first half continued with another eye-catching Cov try to add to the 2021 collection. After using the forwards to go through the phases and create an attacking platform, Joe Snow fired the ball to Fenner to unleash the quality of his back line. An inch was all that was needed for full back Brown to slice his way through visitor’s defence, getting into some clear space. His offload was slapped backwards by Josh Caulfield, but Sam Aspland-Robinson had been tracking the play in support, diving on the loose ball to finish things off.

The next chance fell to the Pirates, who kicked to the corner after Coventry failed to roll away at the ruck. The visitors decided to utilise their driving maul, but this was superbly dealt with by the Coventry pack, who won the scrum put in. However the visitors were having the edge in this set piece, and after forcing a turnover they turned on the power at their own put in, the ball making its way to Brown to go over from close range.

The fly half converted his own score to take his team 12 points clear, but while Coventry fought right back with numerous chances, the final pass or offload just would not stick, a good example being Jordon Poole failing to hold on to an Adam Peters offload after having put the flanker through a hole in the first place.

Then with 10 minutes to play there was a big momentum shift thanks to Tommy Wyatt’s yellow card for a cynical shoulder in Pete White’s back away from the play. The blue and whites wasted little time in making their way up the pitch and after Rob Knox had drawn in three defenders Peters found a gap in the line to score under the sticks. Fenner added the extras to get Coventry back within four points at 19-23.

The wind was in the hosts’ sails and the situation set for another dramatic finish. But instead it was the visitors who struck next, Shae Tucker taking a Kiri Kiri offload to cross the whitewash. Replacement fly half Will Cargill converting to give the visitors an 11-point cushion with less than five minutes to go.

There was still time to at least secure a couple of bonus points for the fourth try and coming within seven, but again the final, crucial offload hit an opponent instead of a supporting runner, bringing the full-time whistle in the process.