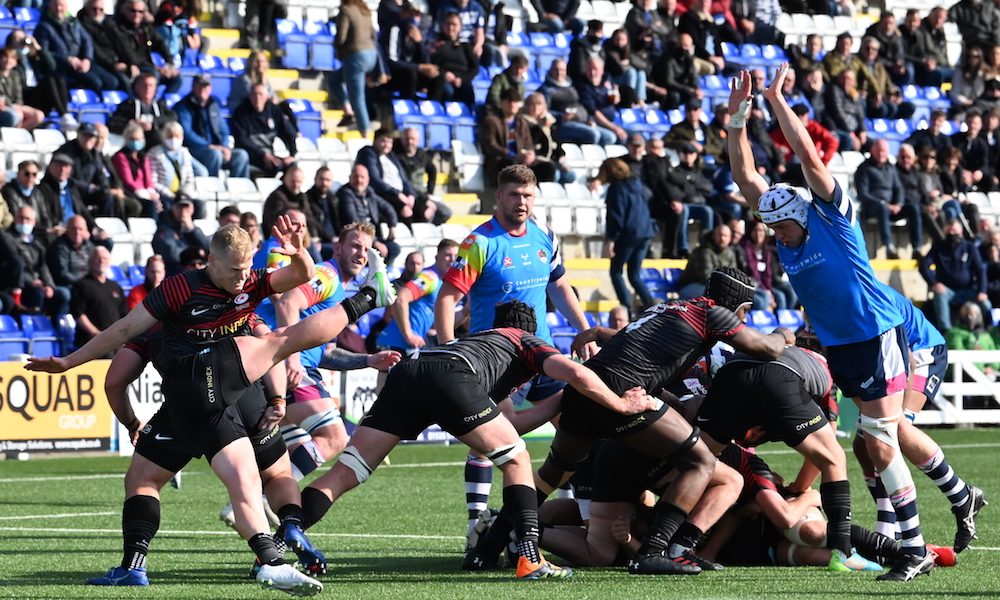 Saracens’ class shone through from the first minute to the last at Butts Park Arena, as the visitors scored 11 unanswered tries to confirm their place in the Greene King IPA Championship play-off finals.

The quality of the visitors’ play was reflected in the reaction given to them by the near-1,400 supporters who filled every available seat and standing place within the stadium, and both teams were given a standing ovation at the final whistle.

The difficult afternoon on the scoreboard started early on. After Cov cleared from the kick-off, the visitors played a number of phases before shifting the ball wide and despite Adam Peters’ best efforts in defence, Alex Lewington’s offload found outside centre Elliot Daly who crossed for the first of his three tries.

The home side weren’t without their chances in the first half, however. After Saracens cleared from the restart, Louis Brown took a high hit from Maro Itoje, then putting his sizeable boot to ball and get Coventry into opposition territory for the first time.

A Will Butt break put the hosts within five metres of the Saracens try line. With advantage being played for an infringement at the ruck, fly half Tony Fenner looked to go cross-field to Rob Stevenson. Play came back, Fenner put the ball into touch but Sarries managed to spoil the lineout and clear their lines.

A knock-on on halfway from Coventry and a following scrum penalty allowed Owen Farrell to the send ball into touch on the Coventry five metre line. Off the back of the lineout Alex Goode crossed obut was held up by some excellent cover from Brown. Play went back for the penalty and the visitors made no mistakes second time around, Jamie George emerging from the back to go over the whitewash.

A period followed in which both teams had chances, but a yellow card shown to Toby Trinder was punished quickly, Sean Reffell going over between the posts.

After a pause in play while Ben Nutley received treatment, Saracens grabbed their fourth score of the half. Off the back of a scrum, the ball was neatly interchanged between the Sarries halfbacks. Scrum-half Aled Davies found Daly, whose over-running and ball juggling caused confusion and created space for the Lions centre to go over unopposed.

Not long after the visitors added their fifth. Once again from a set piece, Saracens found themselves in the red zone. The ball eventually made its way to Welsh international; Nick Tompkins who used his footwork to good effect, crossing next to the posts to leave Farrell with a simple conversion.

The second half started brightly for Coventry with Rob Stevenson making a sensational break down the far flank to make fantastic yardage and giving Cov a brilliant attacking platform.

The crowd was sparked to life, but Goode’s experience in defence forced Stevenson infield, where he was felled by Reffell. From here the home side went from left to right, exploring their options but struggling to break down Saracens’ infamous defence. Eventually the blue and whites were rewarded for their persistence with a penalty which Fenner dispatched into touch. Passing following the lineout made its way to Brown, but the full back was left isolated and Saracens gained a scrum turnover.

Having done the job in defence, Reffell’s power with ball in hand brought him a second try, the flanker staying low to drive through the defence from close range.

Coventry remained determined and made metres with some great breaks, Will Owen’s being the pick of the bunch. The centre found space on the touch line, and with support from Stevenson the pair got Cov into the Sarries half. The ball was eventually spilled and the visitors managed to clear.

Where Cov were not able to put the finish to their moves Saracens were clinical, no more so that Daly securing his hat trick after the neatest of one-two passing with Farrell.

After this, Saracens really turned the pressure up with their attacking quality in full show. The visitors made their way back down to the Coventry five-metre line and with the penalty advantage, Farrell smartly grubbered for Sean Maitland to score in the corner.

Saracens went on to score two more in quick succession with replacement Tom Whiteley scoring after a Goode break and Maitland grabbing his second.

Coventry continued their efforts for a consolation after Itoje spilt forward from the restart. Replacement Kailus Hutchinson was quick to pounce on the loose ball and Coventry had possession in the Saracens 22. Saracens were penalised for sealing off the ball and replacement scrum-half Pete White took the quick tap to maintain Coventry’s momentum. White found captain Ryan Burrows, who cut back looking to put Sam Aspland-Robinson over in the corner, but the visitors’ covering defence managed get across to put the winger into touch.

Coventry showed some attacking promise once again through a Brown break, but the full back’s attempted offload went awry under significant Saracens pressure. Some loose play following this was cleaned up by the visitors and substitute Dom Morris broke some tackles to go over under the sticks. Farrell converted the extras to make the score 0-73, which is how it stayed until the full-time whistle.