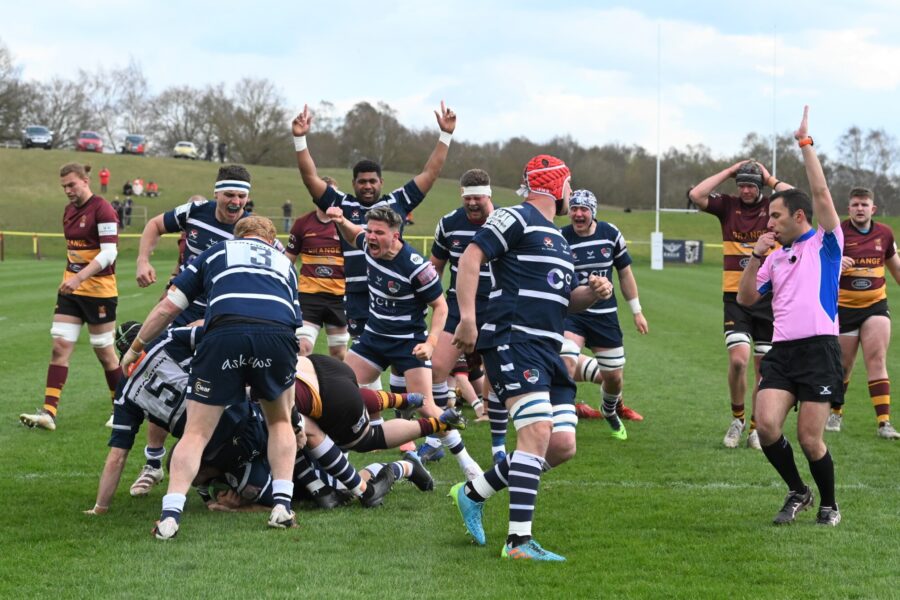 A notoriously hard place for Coventryto go resulted in another disappointing trip to Dillingham Park yesterday as Ampthill claim the win from the frist leg in the opening game of the Championship Cup.

From the whistle, Coventry started strong and was the first to score just 2 minutes into the clash. Off the back of an Ampthill penalty, Coventry do well to clear the ball and then win a penalty of their own. Adam Peters kicks for the line to place the Coventry men just 5m out. Josh Bainbridge received the ball well from the lineout and a driving maul was unleashed to drive Jordon Poole over the line. Evan Mitchell made it look easy, and slotted the conversion for the full 7 points.

A series of three penalties and three lineouts then followed, allowing Ampthill to enter our half. Eventually, Rob Knox picked up a dropped ball and made a charge off to the other end. This led to a Coventry penalty and lineout which also helped to regain territory inside Ampthills half and another penalty for offside placed us further, just inside the opposite 22.

From the lineout, Coventry made some good distance but was forced to offload down the line as the power of the maul expired. A loose and low pass could have been very easily stolen by Ampthill’s hands – but some quick thinking from Evan Mitchell saw him tip the ball overhead to Ryan Burrows, who crashed over the line in his final Championship Cup campaign. Mitchell added the extras to double Coventry’s lead just 8 minutes into the action.

Ampthill responded in the fifteenth minute on the back of our own advanatge when our kick failed to go out of play against the increasing winds at Dillingham Park. Ampthill then boots the ball back and is collected by their winger Ben Cambriani who darts around the Coventry defence. Cambriani chips, chases and collects just in front of the line to bag his team their first try of the game. Try converted by Bragman, 7-14.

Already stuggling with disapline and an increasing penalty count, disaster stuck in the 23rd minute as Matt Johnson was shown a yellow for obstruction and dangerous play, leaving the Cov squad down to just 14 men.

Ampthill looked to have capitlised on the shortage of men when Cambriani crossed for what would have been he second – however, the ref cited a forward pass. This seemed to rile the two teams as both teams get into a scrap under the sticks which eventually saw Louis Brown and and Cambriani joining Johnston in the sin bin for unsportsmanlike conduct.

Johnston soon joined the team back on the field, but either team failed to make it across the line again in the first half. Instead – the first half wrapped up with a penalty kick to Ampthill after Coventry condeeded a penalty at the scrum, allowing the hosts to close the gap to 10-14 as the clock struck 40′.

43 minutes on the clock, Ampthill regained possesion after some kick tennis and found a line into our 22. Sending the ball wide, Ampthill cross in the corner and take the lead by one point after missing their conversion, 15-14.

Another 20 minutes of penalties ensued before we saw another try… unfortunatly not from a Coventry shirt. With just under 20 minutes to go, Coventry make it a little two easy for Ampthill providing lots of space for Josh Hallett to break the line and find Lewis Finlay who ran through under the posts. Extras added, 22-14.

A matter of minutes later, Coventry respond in a similar fashion. Suva Ma’asi collected an overthrown Ampthill line out, which he fired to Tony Fenner who booted it down field. The ball makes its way to Louis James who is tackled but stays on his feet in order to make up some distance before offloading to James Martin. Martin then darts around the remaining Ampthill men and crosses on the near wing, circling around to place the ball under the posts. Fenner adds the extras to close the gap to just one point, 22-21.

Now with just three minutes on the clock, another yellow is shown to Coventry and we are back down to 14 men as Suva Ma’asi goes off to the sin bin. With just seconds left on the clock, Ampthill make the most of their opportunity and close out the game with one more from a rolling maul after we conceed a penalty allowing them to kick for the corner. The conversion sails wide and is met with the refs whistle, full time: 27-21.

We host Ampthill at Butts Park Arena for the second leg of the Champ Cup on the 23/04 at 3pm. Get your tickets here.