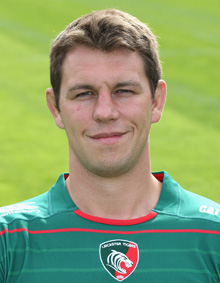 The former England international second row will work alongside Boris Stankovich, creating a formidable forwards coaching partnership with Deacon focusing on the line-out and Stankovich continuing his work with Coventry’s dominant scrum.

Deacon, 36, was capped 29 times by England and made 274 appearances between 2000 and 2014 in a glittering career with Leicester Tigers.

Ambassador and commercial director for the Matt Hampson Foundation, Deacon comes to Cov from Birmingham Moseley where he was appointed line-out coach at the start of last season and then overall forwards coach.

This season he joined the coaching team of England Under-20s, who recently completed their first Six Nations Grand Slam since 2011 and are now preparing for the Junior World Cup in Georgia.

“Louis is a great addition to our coaching team and I am delighted to bring him to Coventry,” said director of rugby, Rowland Winter.

“He is ambitious and will add further quality and edge to our pack.

“His experience and pedigree as a player is top class and he will be a great influence on the team as a whole.”