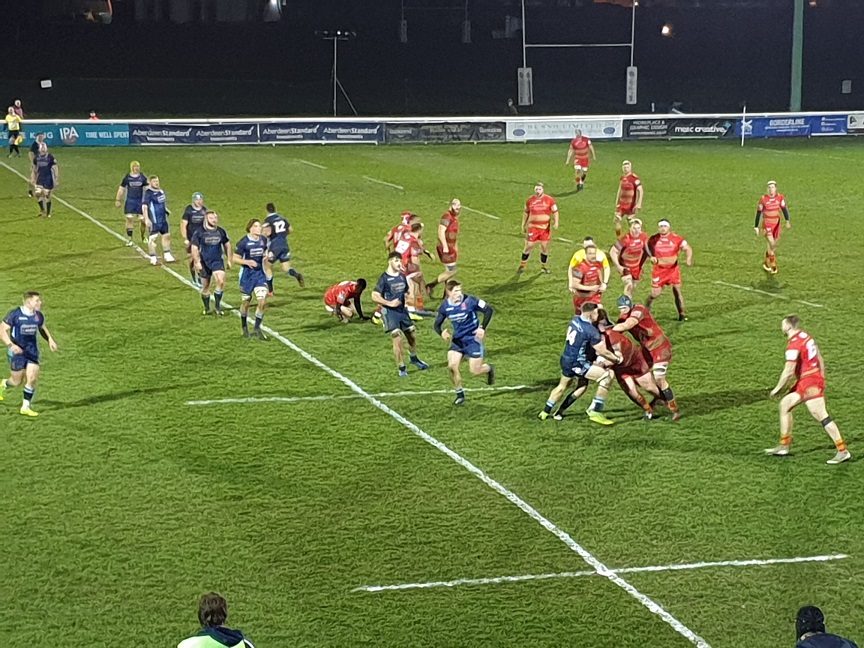 Despite racing to a 14-point lead in the opening quarter, Coventry Rugby are still seeking their first away win of the season following an agonising 15-14 Greene King IPA Championship round 17 defeat at the hands of London Scottish.

Tries from Tom Kessell and Gerard Ellis – his first in Blue-and-White colours – saw the visitors to a well-deserved early lead after an excellent controlled opening in difficult wet and windy conditions.

But after Rory Jennings opened the home account with a simple penalty, his conversion of an outstanding chip-and-chase finish from man-of-the-match Charlie Ingall sent Cov to the break with only a four-point advantage.

And when the hosts took advantage of James Voss’s sin-binning to shunt scrum half Josh Barton over from close range, they had a 47th-minute lead which they never subsequently relinquished.

Cov mixed their game to good effect in the first quarter, kicking accurately for field position then taking full advantage of the errors forced by their consistent chase.

So it was no less than they deserved when Kessell burst over from the Scottish 22-metre line to claim the opening try direct from a lineout.

After Will Maisey added a simple conversion, a precise chip to the corner gave the visitors a second scoring chance only for the hosts to turn possession over on the ground a couple of metres from their own line.

However, the visitors did soon double their advantage when David Halaifonua combined with Tom Emery then slipped an inside pass to recently-signed loose head prop Ellis who went over for his maiden Cov score, again upgraded by Maisey.

Although Scottish’s fly half Rory Jennings then had a 30-metre penalty blown off course, as the contest passed the half-hour mark the hosts were now registering as an attacking threat for the first time.

It was therefore no surprise when their No.10 put them on the board from point-blank range after Cov were caught offside under their own posts following a long spell of back-to-the-wall defence.

And almost immediately after the restart the hosts found a gap in Cov’s kick chase to break from their own half and release the speedy Ingall who beat the covering Junior Bulumakau in a 40-metre foot race to his own chip and in the process claimed a try which Jennings improved.

This reduced Cov’s interval advantage to four points, but the concession of a string of penalties either side of the break then saw the visitors lose second row Voss to a yellow card.

And the home side took immediate advantage to edge ahead for the first time when the lively Barton applied the finishing touch to a lineout drive from the resulting penalty award.

Scottish proceeded to control possession and territory for much of a third quarter which saw the two sets of half-backs go head-to-head in a lengthy kicking dual in the quest for field position.

A superb last-ditch tackle from Will Maisey denied Ingall a second try after home centre Tom Griffiths released him down the right touchline before Cov had to produce another solid close-range defensive set to keep their line intact against another forward onslaught from the Exiles.

With the clock showing 80, the award of a scrum penalty finally allowed Maisey to clear Cov’s lines to halfway and set up one last chance to force a match-winning score.

However, after building promisingly through a number of phases, a loose pass eventually saw the move break down which allowed the hosts to run down the clock and claim the spoils.