COVENTRY’S strength in depth will be on view tomorrow when they return to Butts Park Arena for the first home games of the pre-season  with a double-header against National League Two sides Broadstreet (12.30pm) and  Sale FC (3pm).

Full-back Cliffie Hodgson (pictured) skippers a largely Development Academy  squad in the Broadstreet game, while No.8 Luke Narraway leads the side against Sale FC who narrowly missed out on promotion to National League One last season,

“We have built a stronger relationship with Broadstreet over the last 12 months, they are a great club and Paul Hurst has a strong squad who deservedly won promotion last season.

“There will be a lot of players on both sides who have come through the Coventry and Warwickshire rugby pathway, and it will be a real opportunity to showcase local rugby talent.

“Sale narrowly missed out on their own promotion, having lost the play-off to Old Elthamians. They are well supported with good links to Sale Sharks, so they will be looking to go a step further this season.

“We will have nearly 50 players playing across both games, which will hopefully show our strength in depth, highlighting the quality of the young players within our Development Academy.

Flanker Brett Daynes is ruled out after picking up a chest injury against Jersey Reds, but will be fit for next week. Also missing through injury are Max Trimble (toe), Tom Jubb (hamstring)  and Josh Palmer (ankle) who are all doubts for the start of the season.

The starting XV against Sale includes newcomer Nathanael Titchard-jones in the front row.

“Nathanael is with the Army and has worked hard to be one of the standout loose heads for the Army team,” said Winter. “He is based locally and will add depth to our options in the front row.” 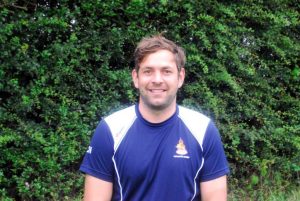