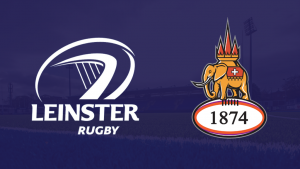 Coventry Rugby are delighted to announce the final date in the pre-season calendar has now been filled with an away trip to Leinster Development on Saturday 18 August, with the game being played at Energia Park.

The Blue and Whites will travel to the home of European Champions Leinster to play their Development side whilst the Irish Province first XV take on Newcastle Falcons on the Friday evening.

This fixture completes our senior pre-season schedule and Head Coach Nick Walshe admits that the trip to Energy Park will show just where the side are at before season starts.

He said: “It’s a great opportunity for a real test against tough opponents which will give us an idea of where we are at in terms of our preparations a few weeks before the season starts.

“Overall, our pre-season schedule will be challenging and provide exactly the tests we need to make sure we are ready to take on Jersey at home in the first game.

Coventry start their pre-season preparations with an away trip to National League One side Bishop’s Stortford before hosting old rivals Birmingham Moseley at Butts Park Arena on Saturday 11thAugust at 3pm.

Following the weekend away in Dublin, Coventry return to Butts Park Arena with a tough test for the Development XV who face Cambridge first XV on the evening of Friday 24thAugust, and then this is followed up with a final showcase at BPA against City-rivals Wasps at 2pm on Saturday 25thAugust, before the Championship campaign begins.

The club are still searching for another competitive pre-season fixture for the Development Academy.