Makaafi, who was rested for last week’s trip to Rosslyn Park, comes back into the starting XV for the National League One leaders with Brett Daynes moving to the bench at the expense of Olly Povoas, while Trimble takes over from Fraser Dingwall in the replacements.

Centre Sam Tuitupou, hooker Phil Nilsen and prop Jack Higgins – for his home debut – all start the game on rotation with Tony Fenner, Scott Tolmie and Jimmy Litchfield who are on the bench. Club captain Phil Boulton is given another week off to fully recover from a back problem

The game pits first in the table against fourth with Cov looking to extend their winning start to 14 games but well aware of the challenge posed by Ampthill’s experienced set of forwards.

“They’re a big, physical threat – they have a big squad with lots of ex-internationals in their pack, and with Kevin Barrett at scrum-half they have some quality players in there,” said director of rugby, Rowland Winter.

“It’s a very difficult game for us, mainly because of the physical challenge they bring, but knowing it is one thing and we have to apply ourselves to raise our game to another level to overcome that.

“We’re looking to continue the second-half performance from last week, which was excellent, with a high tempo to our game and to step it up another notch.

“Hopefully there will be another big crowd there to get behind us, and we are looking forward to it.”

Kick-off is 3pm, and live post-match entertainment in the Arena Bar is by Soul Junction.

Scrum-half Pete White returns to action after a nine-week injury lay-off in the Development side whose Zoo Sports Shield game against Ampthill has been moved to Broadstreet with a 12.30pm kick-off. 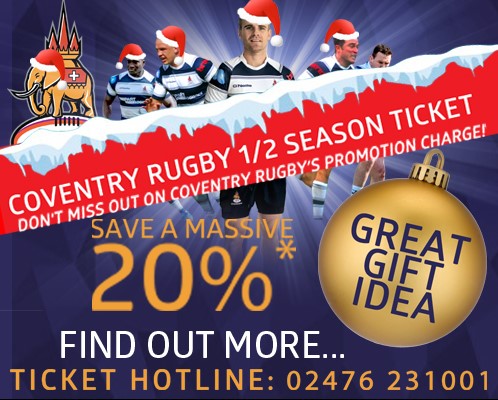 ROUND 14 sees leaders Coventry Rugby at home to fourth-placed Ampthill & District whilst second and third teams Darlington Mowden Park and Plymouth Albion face relatively straight-forward away matches, although Fylde, at home to DMP, might disagree.

Until last week this game would have appeared almost a foregone conclusion for a big loss for Fylde, but a bonus point home win over a good Bishop’s Stortford side, and the fact that DMP are not quite as good away as at home, gives the seasiders hope in what could be a defining game for both. With Fylde now only two wins from safety they have a lot to play for, and their opponents also need the win to keep in touch with Coventry. A close and tense game is likely.

A far less fraught affair is expected as Plymouth Albion, in third place, visit a misfiring Birmingham Moseley. Last week a poor display at Old Elthamians saw Moseley narrowly hold onto a top half position, but Albion appear to have the better pack and all-round game to dent home pride. Another win is required to keep Albion in touch with the leaders.

Waiting in the wings for any slip up by Ampthill or Albion are fifth-placed Blackheath, and a win for them at home to Caldy could propel them into the top three. Both sides have been rather inconsistent with Caldy especially finding it difficult to turn possession into wins. Blackheath are strong at home and although a close game is expected, a home win is likely while another loss for Caldy could bring them closer to the relegation area.

Bishop’s Stortford, in sixth place, suffered a surprise away loss at Fylde last week whilst Loughborough Students came from behind for a big win over Esher. At home, BS should be slight favourites but the Students are capable of matching anyone, and their fitness often comes through in the final quarter.  Although now out of the relegation places, LS are still only three points from danger so it is an important game for them.

Old Albanian, languishing in 15th place and eight points from safety, are at home to Old Elthamians. The visitors are safely ensconced in the top half of the table and, looking to move up to seventh, will be encouraged by their second-half display last week in their big win over Moseley. There should be only one result in this game. leaving OA looking far too closely at relegation.

It’s ninth versus tenth at Esher where Cambridge are the visitors. Both sides have been inconsistent, but Esher have the recent better form so should be slight favourites at home. Another loss for Cambridge could suck them close to the relegation area. Both sides have attacking flair, so it could be a high-scoring encounter.

Two sides in or close to the relegation zone meet at Hull Ionians who, in 12th place, have Rosslyn Park as their visitors. Park are in the relegation zone after their loss at home to Coventry, whilst Ionians are only three points above the relegation places after their away loss at Plymouth Albion. A difficult game to predict as both sides urgently need the win, but the home side probably start very slight favourites.