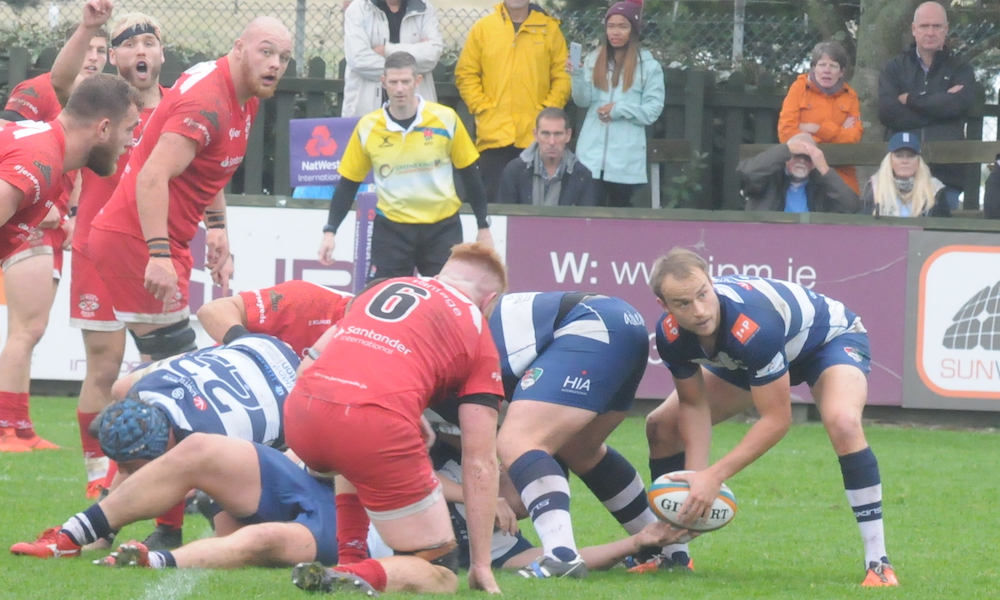 Coventry were on the receiving end of a smash-and-grab raid by Jersey Reds at Stade Santander International. Four times the home team were in the visitors’ 22, four times they came away with a try as the pack drove two mauls over and fly half Greg Dyer got the other two.

Meanwhile the crucial decisions at the other end of the field went against the visitors with two apparent scores ruled out, one for a double movement and the other – in the last play of the game – ruled held up as the Cov pack motored towards the line.

Coventry opened brightly, Rob Knox making a powerful break up the right wing and some good tactical kicking putting Jersey under pressure. However it was Jersey who opened the scoring, making the most of their first visit to the Cov 22. The pack drove well from a lineout, and when the ball came wide a powerful fend from Dyer created the space to go over out wide.

Despite an apparent dominance in the scrum and holding their own around the fringes, Cov’s pack were getting on the wrong side of Matt Turvey, the referee awarding a string of penalties against the visitors.

With their tails up Jersey went for the kill with a chip to the corner, denied this time by some outstanding defensive work in the tight.

The hosts did not have every decision go their way, Jake Upfield seeing yellow for a high tackle on Max Trimble, but the speed of their pressure defence was such that Coventry were finding it difficult to gain a foothold despite the extra man.

Even so, a Rory Jennings grubber to the corner just eluded Max Trimble, and a chip to the unmarked Heath Stevens was a couple of inches too high for the centre, instead going into touch.

Meanwhile Knox remained a main man with ball in hand, and another powerful run brought a penalty which Jennings sent deep into Jersey’s 22. But when Jersey followed up their disruption of the lineout by some strong work on the back foot which turned defence into attack.

A fumble was pounced on, and with a couple of kicks ahead Jersey were 80 metres upfield and Dyer over for his second.

Jennings did land a penalty on the half-hour, followed by some outstanding work done to halt a Jersey maul that included two-thirds of their team, defence rewarded by a second Jennings three-pointer on the stroke of half-time which ensured that Cov ended the 40 minutes very much still in touch.

Jennings began the second half as he had finished the first, but within five minutes Coventry were finding themselves with plenty more work to do. A couple of penalties were kicked by Jersey to the corner, and at the second attempt Luc Jones was coming up with the ball for the Reds’ third try.

A fourth from Jennings kept Cov’s score ticking over, and then his fifth after Mark Best’s yellow brought his team to just two points down. This followed Cov’s most fluent attack of the game, the ball whipping its way right and Heath Stevens making a charge into the 22.

Coventry’s ball retention provoked Best into playing the ball on the floor, and with Jersey’s pack now on the wrong side of Mr Turvey the visitors started to go for touch rather than the posts.

But just when it seemed like a try was inevitable Jersey were awarded a penalty for a double movement in attempting to score.

There was another let-off for Jersey when Jennings scuffed his next shot at goal in the 70th minute, but by then they were down to 13 men, Auguy Slowik yellow carded for coming recklessly into a breakdown.

A popped pass from Tom Kessell to Knox was ruled forwards, and Jersey were awarded a penalty at the subsequent scrum. If it seemed that Coventry’s chances had gone these thoughts were confirmed when Jersey sealed things with their second pushover try of the day, Nic Dolly the man of the moment.

At 22-15 Coventry were still within seven points, and with a last-gasp penalty kicked to the corner they had a chance of a share of the spoils.

The throw was caught and the drive strong. But when the mass of bodies hit the ground Jersey had done enough to hold the ball up and secure the win.