James Voss – “I haven’t seen many crowds like it” 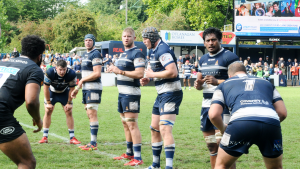 On loan Coventry Rugby lock James Voss paid tribute to the Blue and White supporters who saw the side win 55-14 over Wasps on Saturday.

The powerful second row bagged himself a try during a rampant second period display as the side blew their local rivals away at Butts Park Arena.

“I haven’t seen many crowds like it if I am honest, when you are out there you can definitely feel it and they help you to push on in those dark times that you experience during that 40 minutes and 80 minutes of the game so it’s unbelievable and hopefully they stay with us all season,” said Voss.

Cov struggled to get on the front foot during an even first 40 minutes but the hosts responded in spectacular fashion during the second-half, scoring six tries in total, five of those coming in a period of ten minutes.

In build-up to the 24-year-olds try, Coventry were in full control of the scrum and lineouts and this was a platform the side used to their advantage.

He said: “We struggled to get into the game at the start, but I think it showed a bit of character that we fought back in, we trust the process that we have and the systems we have in place and I think the scoreline reflects that, so I am looking forward to next week.

“There is a lot to build on, but a really good performance form the boys and we have shown what we can do in parts. The season hasn’t started but I think is a really good positive to take into next week against Jersey.”

After featuring for Leicester Tigers the previous week, Voss only spent a short period of time with the squad in preparation for the Wasps game and despite this was a standout performer.

Coventry have brought a positive end to their pre-season campaign, the attention turns to the clubs long-awaited return to the Greene King IPA Championship and upon their return, Voss will face his former side Jersey Reds.

He added: “I can’t wait, I am really looking forward to it.”

“It was nice to get off the bench and get another try but it was from good work from the forwards up front and generally I thought our set piece today was outstanding.

“We knew it was going to be tough, especially the first-half when they came out firing, I thought we weathered the storm early on pretty well and then in the second-half we adapted, worked on and blew them out the park at the end.

“We knew they were going to come out firing from the first-half, they are a quality side and they made us work hard in the first-half. They still made us work hard in the second-half but once we managed to get on top we stayed there and that is credit to us and that is something we can hopefully work on as we continue to go forward in the coming weeks. It was an awesome feeling being out there.

“We have had all of the hard work in pre-season to build towards the start of the season and obviously now it has finished we can all look forward to next week in what again, will be a really tough game and hopefully we can get off to a winning start in the league.