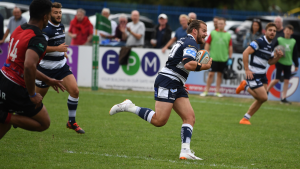 Coventry Rugby full-back James Stokes believes that the Blue and Whites trip to Dublin on Saturday will require the squad to gear up in their preparations.

The 26-year-old was National League One’s top try scorer and the speedster managed to bag himself a brace against Birmingham Moseley in Coventry’s pre-season opener.

“No disrespect to Moseley, but I think it is going to be a bit of a step up against a team that have been competing at the level that we want to be at, consistently, for a number of years,” said Stokes

“It has been a good couple of days at training and I am really looking forward to it.”

Coventry Rugby enjoyed a 62-14 win over fierce rivals Birmingham Moseley to claim the Harry Walker Memorial Trophy last Saturday and travel to face a Leinster Development side at Energia Park.

Stokes believes the side performed well against Moseley and admits that the squad can take many positives from their performance.

He said: “Generally, effort across the board was really good, I think the positives that we can take out of it are that we are getting the pre-season out of our legs, just getting used to the ball, hitting some rucks and general play so positives in that respect.

“There have been quite a few injuries which is obviously not great for the squad, but the bumps and bruises will hopefully go by the time we get to the first game and we do get used to it.

Leinster Development made the British and Irish Cup final last season, missing out to Championship rivals Ealing Trailfinders and Stokes believes the side will relish playing on a 4G pitch.

He added:“I think they are going to be very physical. I think they will be a very quick team, especially on that 4G pitch that we are also excited to get onto, no disrespect to Butts Park but we love the 4G pitches, especially the backs.

“They will be a young, very keen side, especially at the breakdown so we have to be on our game and be ultra-effective in everything we do and don’t give them a sniff.”