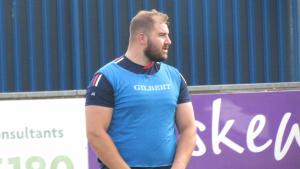 Coventry Rugby prop James Gibbons admits that he has been settling in well at Butts Park Arena and is hoping for a successful season with his new club.

“Yes, it’s good, it’s a fresh challenge for me which I am looking forward to. New boys, a new style of play and it’ll be interesting to see how well we go this year,” said Gibbons.

The 24-year-old who joined Coventry from Championship rivals Ealing Trailfinders admits that the second tier can be a tough environment to be in.

“It is a tough league, you get teams that are very one-dimensional up front which you have to match.

“You also have your teams like Bedford who have good backs as well and I think that’s where we are trying to get to. To have good pack and the back to run in some good try’s as well.”

Gibbons started his career at Gloucester Rugby in their academy, he then went on loan to London Scottish in 2015 for a season and earnt his first taste of rugby in the second tier.

He later joined Ealing Trailfinders on a permanent deal, earning his first professional contract in 2016 and the powerful prop insists that Coventry will embrace life in the second tier.

He said: “We will do well, we will be competitive. Nick Walshe has already spoken about how we are not just here to make the numbers up, so I think we will aim for midtable and see how we go after the first couple of months.”

The front row admits he is looking forward to seeing the backend of a hard pre-season schedule and is excited for the pre-season games to begin.

“Pre-season is always a fun one for the front row, thankfully it is coming to an end pretty soon and we are getting into the pre-season games, but it has been tough.

“Every pre-season is the same, you do a lot of running and a lot of weights and it’s all about getting the weights up in the gym and getting your CV up when you’re running as well.”

The club hosted its first fan event of the season last Saturday and Gibbons admits he enjoyed the occasion and looks ahead to seeing a ground full of fans come the first game of the season.

He said: “Saturday was good, it was a good insight to see all of the fans coming in and how many they get.

“There were a lot of youngsters as well which we had to coach, so I can’t wait for the first home game and see the stand full of fans and hear them from the pitch hopefully.”

Coventry also revealed their new Home and Away kits for the season at the event and despite making a joke at the shirts always being a tight fit, Gibbons was pleased with the outcome of the new jerseys.

He added: “I like the O’Neills stuff its nice kit, I like how the coaches have got different colours on, its good.

“Yes I like the home and away kits but it can be a bit clingy on the front row boys but it should be good, Tony Gulliver will sort us some big sizes out.”