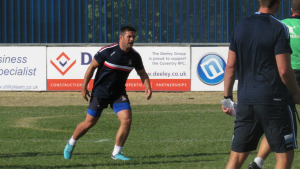 Coventry Rugby flanker Jack Preece has sent a stern message to his teammates ahead of the Blue and Whites crunch pre-season matchup against fierce rivals Birmingham Moseley.

“We need to put in what we have done in training, it has been a tough five to six weeks. We have practiced new moves that we haven’t done at all last year, new lineout sets, new combinations.

“It’s more important that we get out what we have practiced for six weeks and get that right and put that into the league fixtures more than just getting a win.

“If we scrape a win and don’t put in to practice anything that we have done in the past six weeks then it will have been a bit of a waste of pre-season, so that is the main thing, get everything we have practiced right and then we can head into more important games which is the league.”

The 29-year-old is eagerly anticipating Coventry’s pre-season fixtures and admits he always enjoys playing against his former club where he enjoyed a successful stint.

He said: “It’s always good to play against your old teams, its enjoyable to see old faces and play against friends because you can have a bit of banter with them after.

“It’s always good to show a good performance to their fans and the coaches because it’s never nice to have a bad game against them because they will remind you so it’s always enjoyable to see faces that you used to train with each week and haven’t seen for a while.”

Preece spent a season with Birmingham Moseley and was voted as their Player of the Season in the 2016/17 season and the openside flanker revealed what he looks forward to when Coventry face their rivals.

He said: “Our crowd are really good against them, it’s a local derby and the last time we played them I think we were close to 4000 people so whenever you do something good, or you score a try they go mad.

“It’s a nice feeling when you get so many people supporting you doing something you enjoy in a local derby, so I think that will be a good factor in the game which I am looking forward to.

“We go into every fixture to win the game, but to also get out of it what we practice in training, see what combinations work and what the new players are about.

“It’s them against us and us against them, you desperately want to win because you don’t want the shadow of losing to the team below you in the local derby.”

With the Blue and Whites promotion to the second tier, the seasonal Coventry-Moseley derby day will no longer feature as a league fixture and Preece admits he will miss playing his former side but hopes the clubs can make it a yearly pre-season fixture.

“It will be a missed game and hopefully we can play them every single year for pre-season. In the Championship it’s always a tough game, every win is a really big achievement so that will be a better feeling than last year in National One.

“Some games you are expected to win and there isn’t an expected win in the Championship, every single game is really hard so every time we get a win it’ll be a massive achievement for the season.”

Preece admits that he is eagerly anticipating being able to play in front of a lively home crowd at Butts Park Arena for the coming season.

He added: “It will be awesome, I don’t think that I have played for a group of fans this big before with my clubs.

“Every time you get subbed off the pitch or at the end of the game they all stand up and applaud you and against Moseley if you do anything good they will tell you if its good or not with a big roar.

“It’s a great feeling if you do something good in front of so many people and they will applaud you for it, it’s a really good feeling.”