It doesn’t get much bigger

A look ahead to the visit of Birmingham Moseley 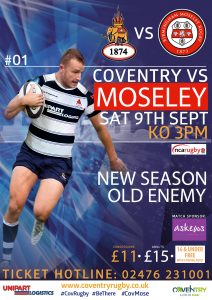 WHAT a way to begin our home league campaign for the 2017-18 season!

Coventry and Moseley have been meeting at all sorts of levels since the two clubs were formed way back in the 1800s, and Saturday is another occasion that both sets of supporters have been eagerly awaiting.

League rugby began 30 years ago in 1987-88 when both clubs were in the old National One, today’s Premiership. Moseley won the game at a time when there was only one league meeting each season.

Saturday is actually the 30th league meeting between the two clubs, including the two Championship play-off games in 2009-10. The win tally could not be much closer, showing 15 to Cov and 14 to Mose, while last season, as so often has been the case, it was one apiece with the home team prevailing both times, 19-14 to Moseley last September and 26-23 to Cov in December.

One can go on and on about incentives, rivalry etc, but little betters the situation we have on Saturday for what promises to be a very exciting afternoon.

There have been many changes at Billesley Common since we last met back in December. Director of rugby Kevin Maggs left at the end of last season, being replaced by club stalwart and former hooker, Richard Protherough. Cov supporters will remember that Richard also made the little matter of 87 appearances in a Cov shirt as well, making his debut in 2003-04. New head coach, Simon Cross is combining his commitments with those he has at Worcester Warriors, with the experienced Tim Molenaar and Ollie Thomas also involved in coaching roles.

There was quite a turnover of players as well close season. Four previous wearers of the red and black jersey are now wearing blue and white in Alex Grove, Jack Preece, Dave Brazier and George Oram. A number of other experienced players also left, among them Sam Pailor, formerly with Cob and now at Stourbridge.

On the plus side for Moseley, several of their new recruits made debuts last week. These included winger Chris Leatham (ex-Cambridge), fly-half James Dixon and lock Lewis Bean from the British Army; scrum-half Rob Lewis (ex-London Welsh), props James Tideswell (Cinderford) and Joe Wrafter (Hartpury); and back row Laurence Cowen (Hull Ionians). Another back row man, flanker Buster Lawrence has returned after a spell at Rotherham.

Moseley finished their first season in National One last April in fifth place, one below Cov. Their build-up to this season included a very encouraging home win over Worcester Warriors, while last Saturday, at home, they drew 21-all with Ampthill, having lead 21-10 going into the final quarter.