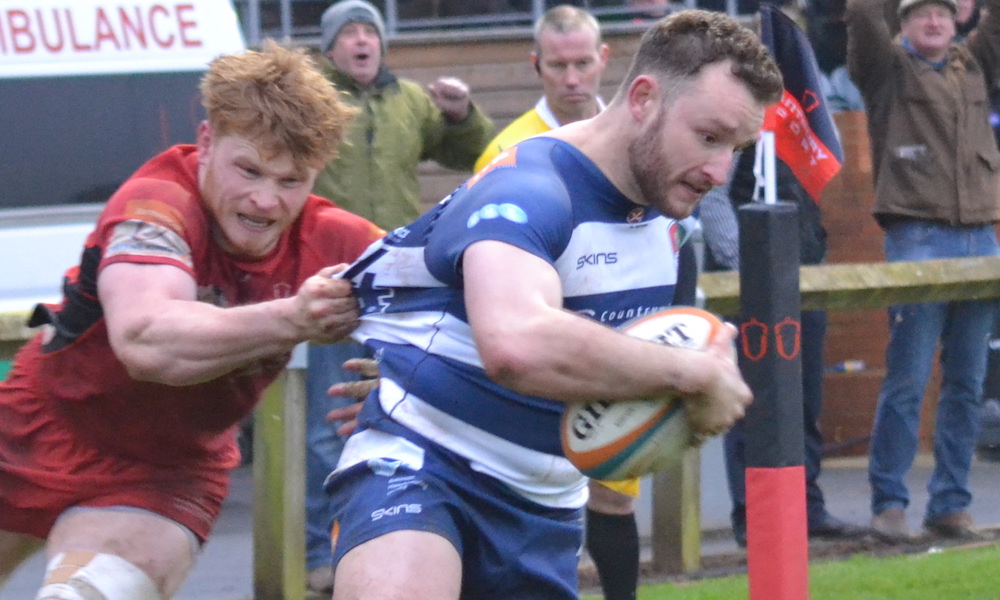 Another week, another Coventry Rugby game that went down to the wire. And like the previous away game at Ampthill it was the hosts who snatched the win with a last-gasp penalty.

The teams took swings at each other like a pair of prizefighters in the opening 10 minutes, each looking to test the other out both through the middle and by spreading the ball wide.

Hartpury had the first sight of points, Joshua Bragman skying a 40-metre penalty shot. But while the hosts were looking as if they would be dangerous when given half-a-chance at no point were they given that opportunity by the blue and white line.

Indeed, the visitors’ defence was strong enough to force a turnover, and with a Ryan Burrows charge up the middle and a Max Trimble break up the left Cov were in the home 22.

However, Hartpury de-fused the danger from both this and a subsequent lineout they still found themselves a penalty down thanks to Rory Jennings’s accuracy from in front of the sticks.

The moment of the opening quarter also came from Cov, Will Maisey finding Trimble with a pinpoint cross-field kick which the winger collected without a break in stride. Hartpury’s Jacob Morris scrambled to make a crucial tackle, but it was a demonstration of Coventry’s willingness to mix and match the focus of attack.

Nevertheless Hartpury tied things up through Bragman, and before the half-hour they looked to be in front. The finish had been a cracker from Robbie Smith, who had danced his way into clear space to take him over the line, but there had also been a helpful block on Scott Tolmie, and following a call from TMO Matthew Carley in the Sky trucks instead of a try to Hartpury it was a penalty to Coventry.

Still it was a useful demonstration – if any were needed – that Hartpury deserved respect, not least for the way Morris had broken a few tackles to spark the attack.

It certainly spurred Coventry into action, who within four minutes were back in front with a peach of a score. Trimble came into the line from a scrum, arcing around the midfield to make the extra man on the right, and with a timely offload Rob Knox was away and over.

Jennings’s conversion was equally good from the touchline, and as the half drew to a close it looked as if the centre would be having another shot at goal as Trimble sped clear up the left.

But the ball was turned over and in a flash Hartpury were back up the other end and over the line, second rower Simon Linsell coming up with the ball after crashing over from close range.

Bragman’s conversion meant that the second half began on a knife-edge, and with Coventry beginning with urgency and directness they quickly worked their way into a promising position.

Hartpury, too, continued where they had left off, Smith putting Maisey under pressure with a break and kick ahead, which was followed up by a charge-down which pinned Cov deep in their 22.

And even while Cov cleared back came Hartpury, Seb Nagle-Taylor breaking a tackle to set up the position finished by Will Safe’s try.

At this point nothing that Cov were trying was coming off, with Hartpury dominating both possession and position. There was a let-off when Tiff Eden missed a kickable penalty and a promising opportunity when George Simpson fumbled on halfway. But Cov failed to capitalise, turning the ball over immediately.

Then as the clock ticked into the final quarter all of a sudden things clicked. Knox was the catalyst, coming off his wing to take a Tom Kessell offload and power his way through several tackles. On the front foot Coventry went through phases and took play into the home 22, and while Hartpury were awarded a penalty to clear it was not long before the visitors were back in the red zone.

This time they made the most of the position, Knox over for his second after the forwards had pulled in the defence with a powerful maul.

Jennings missed the conversion, and with Eden landing a penalty soon after the restart it meant that Cov needed a try going into the final 10 minutes if they were to get the win.

Senitiki Nayalo came close as Cov flooded forward following Kessell’s offload to Andy Forsyth which sent the centre into the 22. But while Hartpury won a penalty on the floor they made a mess of the subsequent lineout, and with Ryan Burrows decimating the home defence through the middle it created the havoc from which Dan Lewis dived over out wide.

Jennings’s conversion drifted agonisingly left, and with a couple of minutes left things could not have been more tense.

Hartpury had two great chances with a scrum in the Cov 22 and then a dangerous attack. Both brought penalties to Coventry, and when Maisey sent play to the home 10-metre line things looked set for the visitors to snatch the win.

However Hartpury were awarded a free kick and sent the ball to the sky. Meanwhile there was no call in the Cov line, meaning that when the ball hit the deck it was Hartpury’s Sam Graham who came up with the ball.

Referee Sara Cox’s arm came out for an advantage, and while Hartpury went through some phases it was not long before play came back for Eden to finish things off.