COVENTRY Rugby has agreed a two-month loan deal with Northampton Saints for scrum-half Tom Kessell, who will make his debut in the starting XV for tomorrow’s game against Caldy at Butts Park Arena.

But Cov suffered another injury blow last night when centre Heath Stevens – who was set to make his 99th appearance – suffered a broken leg at training last night after slipping while running with the ball and falling awkwardly.

“Heath will be having an operation today and we will provide an update when possible,” said director of rugby, Rowland Winter.

”We are gutted for him, he is a key player and leader within our team and epitomises everything that we are about as a team. We are looking forward to getting him back involved as part of our support team, and we are fortunate to have Tony Fenner and Rob Knox back from injury in time.”

Kessell, 27, made 85 appearances for Cornish Pirates before joining Saints, where he has played 22 games in two seasons, and comes in as cover for injured duo Pete White and Dave Brazier.

Kessell (pictured) was named in the 2014-15 Championship Dream Team, playing in the Championship XV that beat Canada in November 2014, and has toured with England Counties. 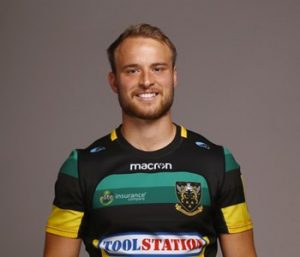 “Tom’s a quality player and we look forward to having him on board,” said director of rugby, Rowland Winter. “He has a strong all-round game and will be a great asset in a position where we have been very unlucky with injuries.

“Pete is due to return to straight-line running in the next three weeks and is pencilled in to resume playing in early December, while Dave is not likely to be back until after that.”

Cov make a total of five changes – three enforced – to their 20-strong match squad as they attempt to make it ten out of ten for the season, starting the day seven points clear at the top of National League One.

Second row Cameron Gray takes over from George Oram, who picked up a slight hamstring injury in last week’s win at Cambridge, and winger Max Trimble comes off the bench to start in place of Tom Emery who is in parent club Northampton’s squad for their Anglo-Welsh Cup game at Exeter Chiefs.

Injured in the opening game of the season at Hull Ionians, Fenner returns to the side at centre for Sam Tuitupou, who is suspended after being sent off at Cambridge, alongside Knox, also back from injury to replace Stevens, with Ben Palmer coming on to the bench.

In the pack, Olly Povoas replaces rested Jack Preece at open side flanker, and captain Phil Boulton and Luke Narraway start in rotation with Nathanael Titchard-jones and Brett Daynes who are on the bench.

This will be the first meeting between the two clubs with Caldy playing at their highest level after winning promotion from National Two North as champions last season.

So far they have managed two wins from nine games but have been involved in a number of close finishes, and Winter is prepared for a testing afternoon.

“They’ve got a strong, physical pack and play a good brand of rugby,” said Winter. “They won their league last season and are a well-knit group of confident players, so it will be another challenge for us.

“The last team to really push us was another promoted side, Bishop’s Stortford, so we expect a tough test.

“But it’s a confident camp here, we have a good group of players and it’s refreshing that we don’t need to talk too much in the week about how we approach games because everyone is so focused and committed to the cause, taking one step at a time.

“That reassures me that we have got a squad of players ready to take on Caldy.”

Kick-off is 3pm, and live post-match entertainment in the Arena Bar is by Danny and Friends.

The Zoo Sports Shield game against London Scottish 2nd has been postponed with the visitors unable to raise a side.

As a result, a number of players will be out on loan for the weekend to have game time – Kwaku Asiedu and Tom Jubb at Leicester Lions, Harry Morley and Phil Ackuaku at Chinnor, Charley Robinson and Tarik Tin at Towcestrians, Ciaran Grimmer at Market Bosworth and Sam Payne at Nuneaton.

Waita Setu, who was injured on his first-team debut at Old Albanian, is set to undergo surgery to his shoulder on November 11.

Said Winter: “We have agreed that this is the best way to deal with it – he could have carried on playing, but it would keep on recurring and he would not be able to put a run of games together.

“He’s gutted, he came halfway round the world to play rugby and not be on the sidelines, but we hope to fix him up and get him back on the field before the end of the season and looking ahead to next year.”

Week 10 sees the first third of the season completed with all of the top five sides facing potentially difficult ties, whilst at the bottom of the table Fylde face a crucial fixture against Old Albanian.

Darlington Mowden Park, after their impressive win over Plymputh Albion, travel to London to face Esher. On the face of it a win for DMP, but last week Esher beat high-flying Blackheath  convincingly and If they can maintain that quality, then another home win may be on the cards.

Plymouth Albion, in third place, travel to Rosslyn Park looking to keep in touch with the leaders. Park have had a poor season so far with only three wins, but they have a good enough squad to raise their game They will need to be at their best to get anything out of this clash and Albion should be too strong, but it may be a lot closer than expected.

Fourth-placed Ampthill & District face a tricky game at home to Old Elthamians. OE are only six points behind Ampthill and have settled well into NL1. They have some impressive backs and if their pack can get enough possession, then Ampthill might be surprised. An important game for Ampthill to win if they want to keep pressure on the top three.

Blackheath at home to Bishop’s Stortford pits fifth in the table against sixth. BS are another side who have settled well into NL1 and will not be overawed in their visit to Blackheath. Both sides were poor last week, although BS did manage to win, and the home side will need to get their season back on track if they have any higher ambitions. A close game is in prospect with Blackheath slight favourites.

Birmingham Moseley are back at home, where their form has been indifferent, to face 15th-placed Loughborough Students. Both sides need a win to either move out of the relegation zone or else away from it, and a close and high-scoring game is in prospect with the home pack giving Moseley the edge.

Hull Ionians, in 14th place, face a difficult home tie with Cambridge. Ionians have the ability to score tries, especially with their trademark catch and drive, but they will come across a good Cambridge defence. A game which could go either way, with home advantage slightly favouring Hull Ionians.

Bottom side Fylde travel to Old Albanian looking for a win which might see them start the long haul to safety. However, at home OA can be a force and if they have a full-strength complement have a great chance to win and put further daylight between them and the bottom three.